After Joseph Cahoon’s death, Joel and Margaret Cahoon came to Rose Hill and ushered in the Victorian era.

Joel Cahoon left the family homestead in 1813 to join the Ohio Militia. He would return to assist his father in building Rose Hill before working as a mail carrier on horseback, riding between Cleveland and Maumee until 1822. From there, he and his brother Daniel started a contracting business building public works such as canals, aqueducts, viaducts, and railroads in Ohio, Indiana, and Maryland. During Joel’s time in Maryland, he met a young widow, Margaret Dickson Van Allen and the two wed in 1831. 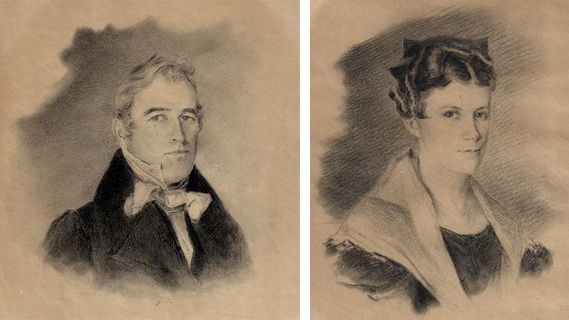 After Joseph Cahoon’s death in 1839, the homestead sat empty and neglected for three years. In October 1841, Daniel, Joel’s brother and business partner of 21 years, passed away in Cincinnati. This prompted Joel to leave the contracting business and return to the family homestead. In 1842, Joel, Margaret, and their children rented a house in Rockport (now Rocky River) and began to fix up the old homestead and mills. Finally it was ready to live in and the old business boomed. Margaret gave the homestead it’s signature name in reference to the copious rose bushes her mother-in-law had planted. With this name, the homestead entered a new era.

Joel and Margaret Cahoon made Dover their home at the beginning of the Victorian era. This was the period of Queen Victoria’s reign, from 1837 until her death in 1901. It was a time of rapid change and growth in manufacturing, immigration, and technology. The middle class exploded as did the machine-made goods that they could now afford. More people could now afford the luxuries previously afforded only to the upper class. With an influx of new customers and a manufacturing sector to match, advertising was truly born.
The Cahoons now had access to an expanded world of goods from the new factories and the increased ease of shipping via the Great Lakes and railways. The house no longer had to rely on being furnished by goods brought in wagons from Vermont or from what could be made by hand. Joel and Margaret could decorate Rose Hill in the latest styles, recreated here in the Victorian Parlor. 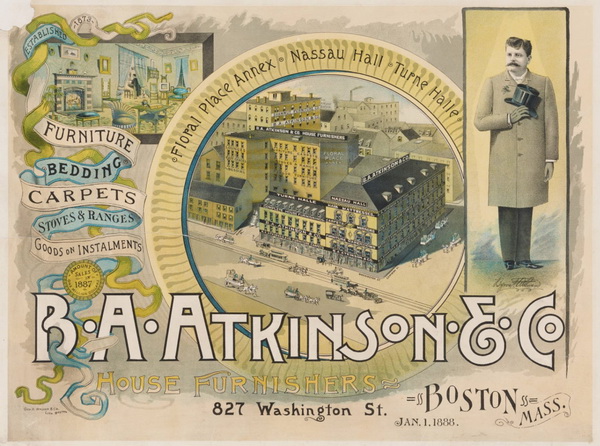 Victorian era interiors were characterized by ornate velvet furnishing, dark-rich colors, and the appearance of luxury. There was not one dominant style of furniture in the Victorian period. Designers modified many styles from Gothic, Tudor, Elizabethan, English Rococo, and Neoclassical eras. 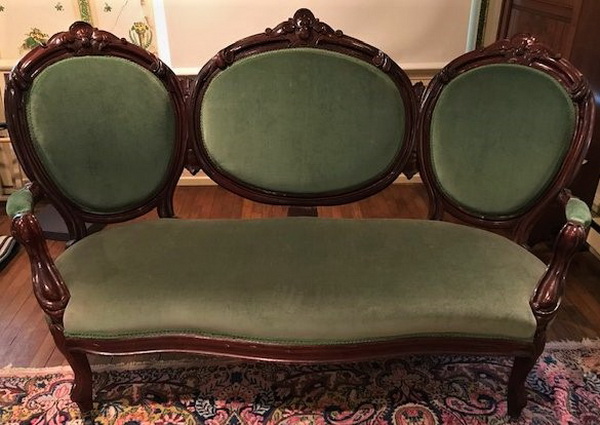 French motifs are also hinted throughout the Victorian Parlor, characteristic of the American Empire style rooted in the First French era (1804-1814) under Napoleon Bonaparte’s rule. This movement represents the late Neoclassical themes of geometric forms, use of columns, and excessive use of Rococo exuberance.
This walnut and green velvet matching set of settee, chair, and footstool belonged to the Cahoons and was likely made between 1850 and 1870. They are prime examples of stylish and whimsical Victorian interior design, with the footstool bringing “Good Luck” to the house in the form of a horseshoe.

During the Victorian era, hair art was closely associated with memento mori, an artistic or symbolic reminder of the inevitability of death, as a token of remembrance. It was used in jewelry, love tokens, family trees, friendship keepsakes and hair wreaths. The techniques used to create decorative items from hair varied, with an incredible attention to detail. Clean, flattened hair was woven, dyed, accessorized with beads, looped around wire, and/or even mixed with sap-like material then crafted into shapes and patterns. The finished piece usually went under glass or on top of ivory for jewelry.
In England, Queen Victoria’s mourning of Prince Albert, who died in 1861, included commissioning hair work with the prince’s hair. This in turn, helped to popularize mourning jewelry. This popularity diminished with the outbreak of World War I as people were expected to donate time and money. 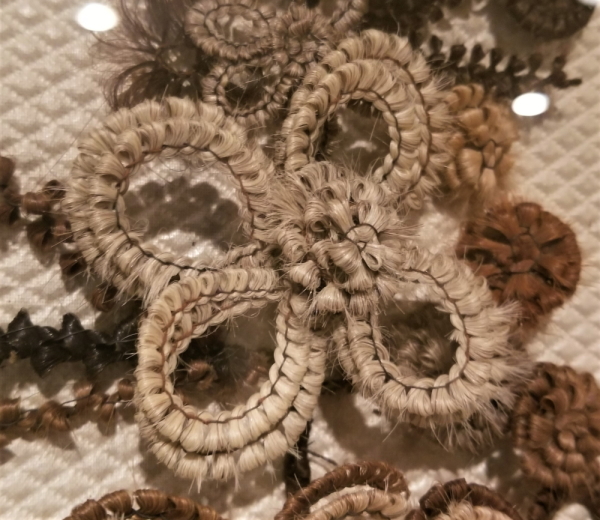 The Aldrich family made this hair wreath around 1900. It was passed down through the generations to Marguerite Guthery Drake. It is woven in macrame of human and animal hair. Most of the flowers are of family hair, and the middle flower is from the family horse.

Music and Leisure in the Victorian Era

Manufacturing and the growth of the middle class also brought with it the rise of leisure and popular music. A parlor such as Rose Hill’s Victorian Parlor would be the site of impromptu performances by family and friends of the latest songs, literally called parlor music. Sheet music publishing flourished as did the manufacture of instruments for the parlor. 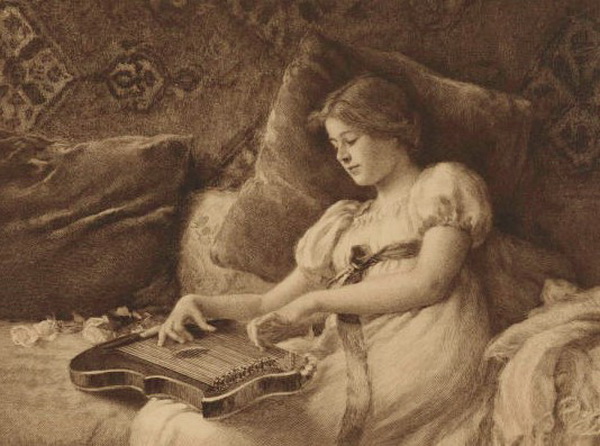 The Chartola Grand zither is an example of the mandolin, fretless, or guitar zither that was popularized in the late Victorian era. 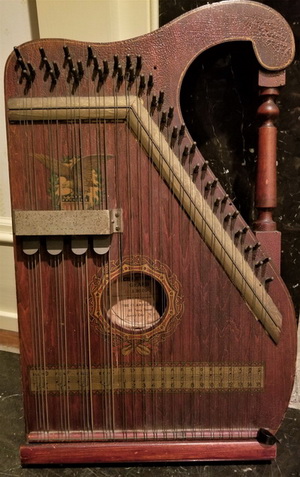 It would have been an acceptable instrument for a middle- and upper-class lady to learn. Her performances would have provided a way to display her attractive qualities to potential marriage matches in the family parlor. Her skill with the zither or instrument of choice was also a reflection of the family’s wealth and security, as only the well-to-do could afford the instrument, sheet music, lessons, and time to practice. 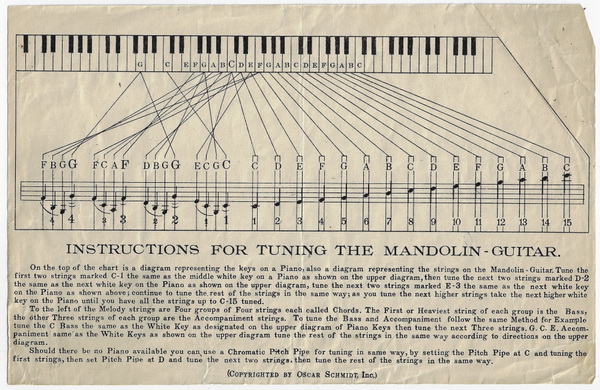 A. B. Chase Walnut Chapel Organ

A cottage organ manufactured by A.B. Chase Organ, Norwalk, Ohio sits in the Victorian Parlor. The company was founded in 1875 by Allen B. Chase.

They offered a variety of case styles for their organs to suit the variety of tastes and styles in Victorian parlors. The organ at Rose Hill is the walnut Chapel Organ in ‘case style 2’ with Eastlake influenced carved decorations. (Read more about the Eastlake Movement in the Victorian Bedroom.)
Rose Hill’s organ can be seen on pages 9-10 in the “A.B. Chase Organ Sales Catalog 1890.” To view a scanned copy of the original sales catalogue and other ephemera visit Antique Piano Shop.

Not everyone had the musical talent to play parlor music. That’s where the music box stepped in. When you visit Rose Hill, you can see a Regina table model music box. 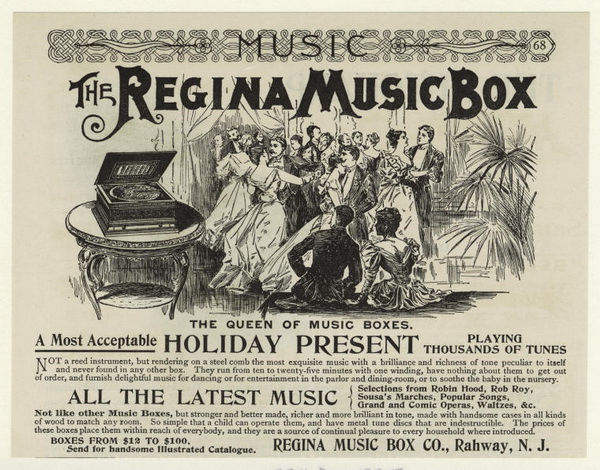 Traditional music boxes gained popularity in the 18th century with the French court of Louis XIV. In the 1880s, a new music box style appeared in Leipzig, Germany, the interchangeable disc music box. This new disk-playing machine allowed the player to change discs with ease. 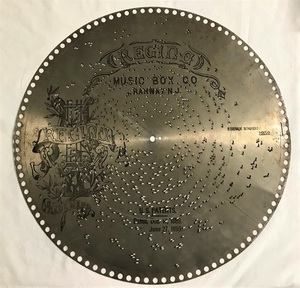 The popularity of these boxes spanned from about 1890 to 1915, with Regina producing more than 100,000 music boxes. The rise of more advanced instruments, like the gramophone and player piano, in the early 1900s, as well as the impact of the Great Depression (1929-1939) on the U.S. economy, led to a dramatic decrease in music-box sales. Only a relatively small number of Regina music boxes have survived from two world wars, scrap metal drives, and other forms of destruction.