The Cahoon family once used this room as the informal kitchen dining area but now it serves as a library, honoring the family’s request that their house be maintained and used as a library and museum.

After traveling as a contractor for 20 years, Joel Cahoon, the third son of settlers Joseph and Lydia Cahoon, returned to Dover with his wife Margaret in 1842. He added this room to the original house where it served as the informal kitchen dining area for the Cahoon family. 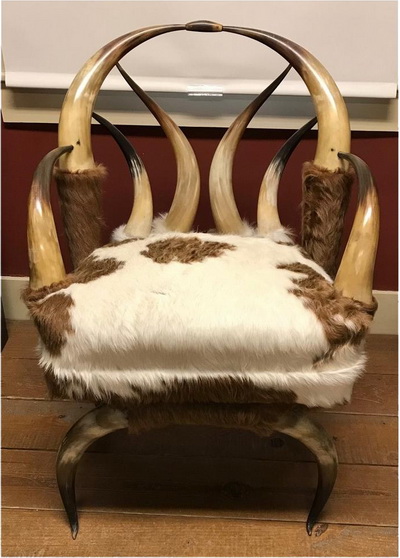 When Joel Cahoon traveled to the Centennial International Exhibition of 1876 in Philadelphia, Pennsylvania, he brought back with him an unusual Texas Longhorn and calfskin chair.

This was right at the start of horn furniture’s popularity. The art of making horn furniture was brought over from Europe, where elk and deer antlers made up most of the furniture. But now that the art was in America, craftsmen embraced the availability of the large and plentiful Texas Longhorn horns. Horn furniture gained a foothold in American decor at exhibitions and fairs like Pennsylvania’s Centennial International Exhibition.

Pennsylvania’s Exhibition was the first official World’s Fair to be held in the United States, and celebrated the 100th anniversary of the signing of the Declaration of Independence. In fact, this patriotic spirit was used to help raise funds for the Statue of Liberty’s base. The finished torch was put on display at the Exhibition where visitors could buy tickets to climb into the torch by way of a ladder. This generated funds through ticket sales as well as excited the public to help further fundraise for the base. 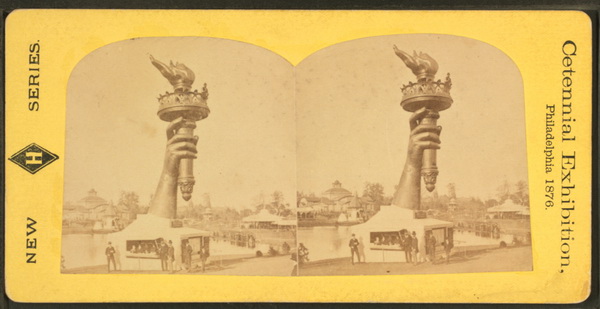 While Joel may have seen and even climbed into Lady Liberty’s torch, what he likely didn’t know was that librarians from across the country were also gathering at the Exhibition. At this “Librarians’ Conference” they founded the American Library Association. Forty years later, the house Joel brought his unusual chair home to would become a library of its own. 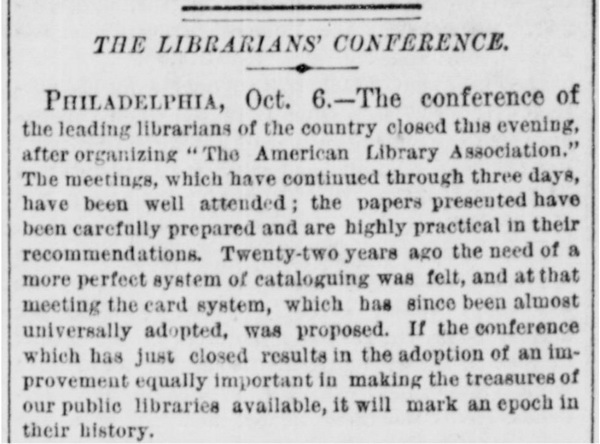 From Sitting Room to Legacy

Ida Maria Cahoon, Joel and Lydia’s youngest daughter, was the last surviving member of the Cahoon family. It was her final wish that the family homestead would be turned into a library and museum. Her will reads:
“I hereby direct that the dwelling house now standing on said land and which was built in 1818, shall be forever maintained and used as a Library and Museum.” [Full PDF supplied by City of Bay Village] 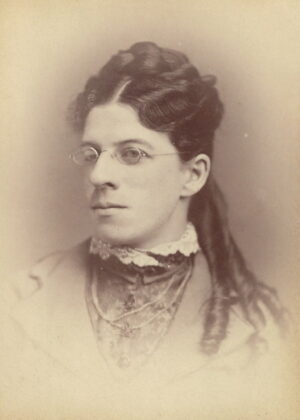 After her death in 1917, the family home sat vacant until Emma Paul Pope and Olive Paul Bailey opened Rose Hill as the “Dover by the Lake Library” on May 24, 1921. The majority of the collection was made up of the Cahoon family’s private library, amounting to around 1,000 volumes. This included works written by Ida Cahoon herself such as “Looking Backward,” and “History of the Cahoon Family.”

The next year, in 1922, Julia Osborn Scott, great-granddaughter of Reuben Osborn, became the librarian of Dover-by-the-Lake. She remained the librarian for the next 24 years. In the early years of her tenure, the library was open five afternoons and three evenings each week. By 1935, the collection had grown to over 7,000 volumes.

Soon, the population, use of the library, and size of the collection prompted Dover-by-the-Lake Library to join the Cuyahoga County Library System in 1949. They underwent a remodeling of the Rose Hill, adding meeting rooms on the second floor to accommodate the needs of the public. However, this was not enough for the size of Bay Village, by that time numbering around 13,000 people. Eleven years later, in 1960, a new Library opened at the corner of Dover and Wolf Roads.

Despite no longer being the site of the main library, Rose Hill maintains the spirit of Ida’s final wish. Rose Hill’s reference library still contains Ida’s own published works, original Cahoon family books, letters, early settler journals, and other documentation bequeathed to the Bay Village Historical Society. Additionally, the Local Historical Research and Genealogy Library is housed next to the library room in what used to be used as a pantry in the 1880s.

The library became one of the many meeting places for the Bay Village Reading Club, a social and literary organization that was founded in 1912.

Ida Cahoon was a prominent member of the Methodist Church, and in 1912 she suggested that the incoming pastor meet with the citizens of the eastern section of Bay Village in order to establish a religious service for the area. The new pastor was reverend W. C. Endly, D.D. of Elyria. Dr. Endly and the superintendent of the Methodist Sunday School, John D. Rumbaugh, set up a Sunday School service in the area just as Ida had hoped.

But that was not all that Dr. Endly and John Rumbaugh established for the people of Bay Village. That same year, Dr. Endly gathered a number of people in the church parlor to create a club “to follow some course of study, the discussion of literary topics and for the cultivation of social features.” The club’s first president was John Rumbaugh who put together a program committee of Clara Thompson, Mrs. Carrie Saddler, and Mrs. Clifton Aldrich.

The initial membership dues were 10 cents and the first club meetings were held at the church. As interest waned, the club decided to transition to meeting at different homes each week. This brought with it a chance for members to prepare and enjoy food during their meetings and provide entertainment such as musical performances. As time went on, the meeting places expanded to the library and the beach. 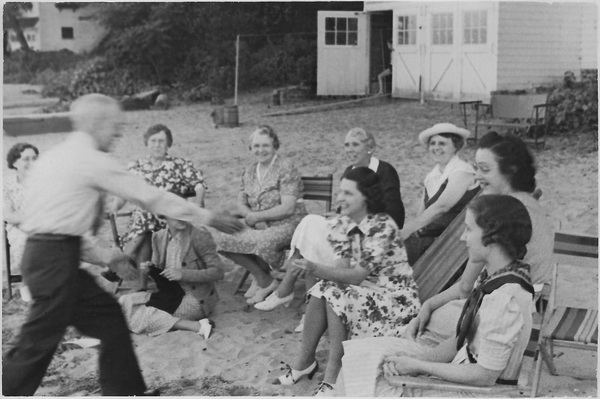 The Bay Village Reading Club meeting on the beach at the Drake’s in August, 1938.

The Bay Village Reading Club covered almost every subject imaginable, especially in the early years. The topics from the 1927-1928 season reflect the interests of the club members, covering everything from “Atlantis” to “Atheism.” The topics also provide insight into the concerns of the time period, such as: “Should Girls go to College,” and “Should Fruit Trees be Dusted or Sprayed.” 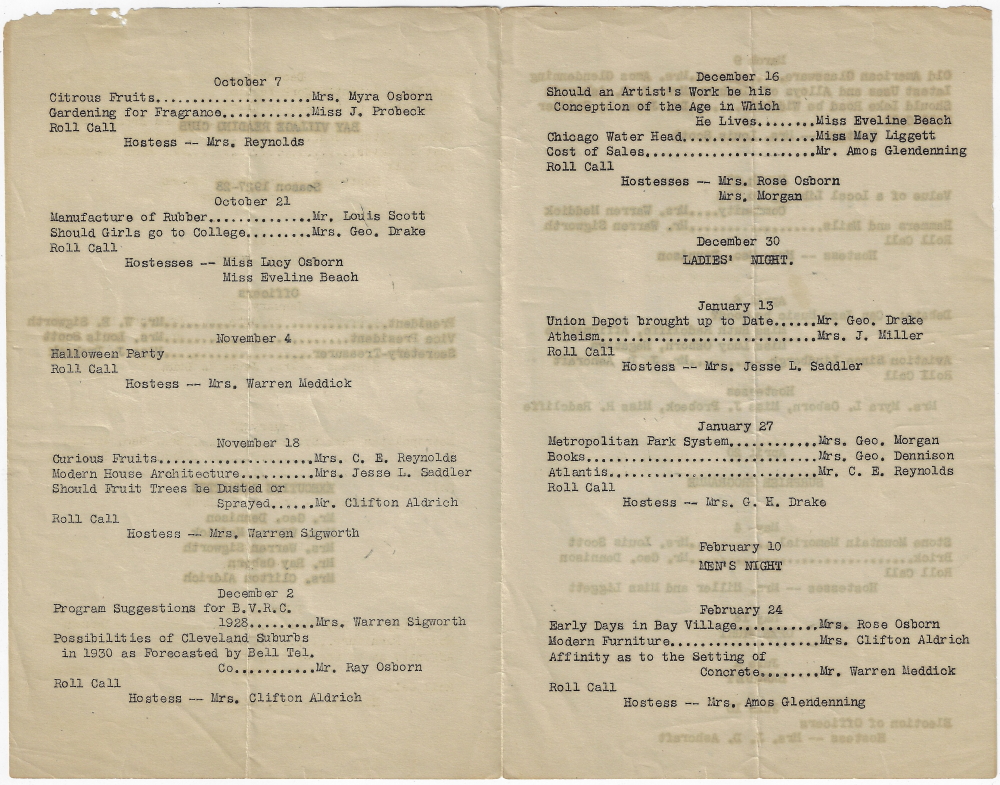 The Bay Village Reading Club lasted into the 1980s, having provided decades of social and intellectual entertainment for its members. By the time the club ended, they had gone on trips to Cedar Point, held yearly banquets, and, of course, debated “Can Jazz Music be Good?”