In the 1800s, all manner of life revolved around the cooking area, which was the primary source of heat, light, and safety.

For the Cahoons and other families in the area, the work day started before the sun came up in the 1800s. Boys were tasked to split and carry firewood for the stove or fireplace, tend to the farm animals, and carry water to the house. Girls assisted in cooking, collecting eggs, churning butter, preserving foods, making candles, spinning and sewing clothes for the family, and caring for younger siblings. 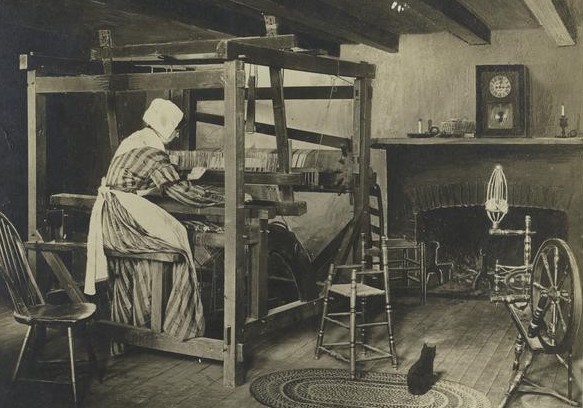 Before clothes were manufactured on a large scale, most families had to make their clothing from scratch. Many times starting all the way from raising sheep and growing flax to spin into thread. The Country Kitchen showcases the spinning wheels used to create this thread. This was a task done almost exclusively by women. Once there was sufficient thread, it might be dyed with plants. Next it would be measured and wound into manageable portions that would be threaded onto a loom. From there fabric would be woven by hand before being cut and sewn into garments.

A Brief History of the Loom 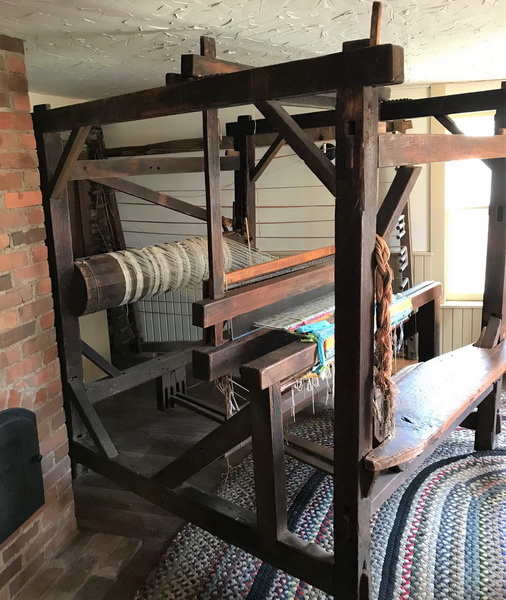 A loom is a device used to weave cloth and tapestry. The basic purpose of a loom is to hold the threads under tension to facilitate the interweaving of threads at right angles. By 700 AD, looms could be found in Asia, Africa, and Europe. The fundamental operation of the loom remained unchanged, but a long succession of improvements was introduced through medieval times, with the establishment of guilds. Colonial America began to weave cloth from locally produced fibers, mostly cotton and wool.
During the Industrial Revolution (1760-1840), weaving was switched from hand to machine-powered. The first powered loom was built in 1785 by Edmund Cartwright. It continued to be refined over the next 47 years until a design made the operation completely automatic. This weaving process sped up production significantly and became a foundation of the Industrial Revolution.

Portrait of Emma Kupfer, given to Bay Village Historical Society by Kay Laughlin.

The loom in the Country Kitchen was discovered in the original Cahoon barn (today the Community Center), owned by Emma Kupfer, a local weaver. It is a counterbalance loom. This type of loom is the oldest documented horizontal loom with treadles. Emma used this loom to weave rugs to supplement her income when she wasn’t cooking for wealthy families in Cleveland.

Much like ready-made shirts, the Cahoons couldn’t go to the store to pick up butter or bread when they needed it. Instead they had to churn the butter and bake the bread themselves. For a large family, like the Cahoons or Aldriches, this meant food was prepared constantly and in large quantities. Tools were made to assist in this process. 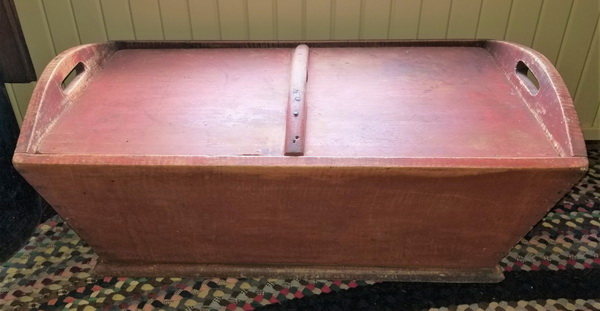 One such piece was the dough box, also called a dough or kneading trough. The angled sides kept the flour and dough contained while being kneaded before leaving it in the box to rise. 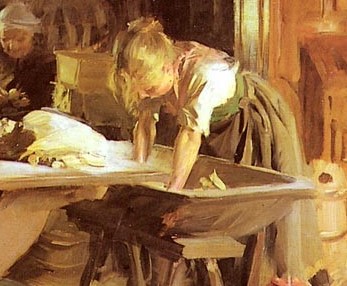 Many had lids, like the Aldrich family’s dough box, which kept the dough safe from vermin and encouraged a good rise. The lid could also be used to shape the dough once risen, as well as for carrying the dough to the fire for baking. The Aldrich dough box was painted red, and looks almost like a cradle.

The Lake Erie microclimate provided excellent growing conditions for farming once the land was cleared. Agriculture in Dover Township evolved into the cultivation of grain, oats, apples, peaches, and grapes. The microclimate provided so advantageous, in the latter half of the nineteenth century, Dover Township was the second-largest area of grape production in the United States.

Henry Wischmeyer Sr. is a notable Bay Village figure who took advantage of this microclimate. He took his knowledge of viticulture with him from Germany and started a successful business in Dover. 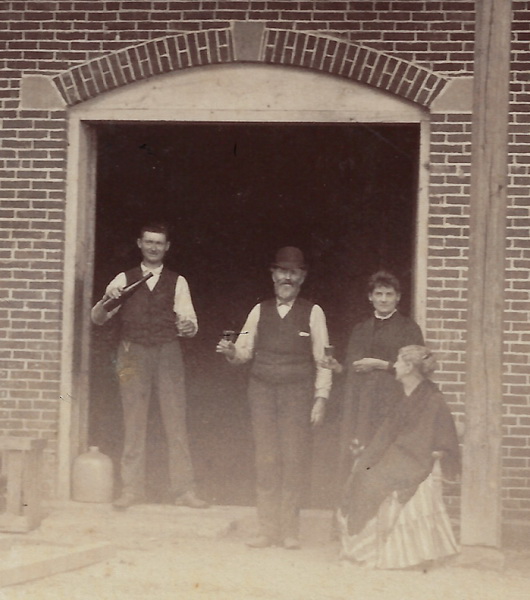 Henry Wischmeyer (middle left) was photographed at his wine cellar in 1892 by Erwin Wischmeyer, tasting some of the product with his son Louis Wischmeyer (far left), and friends Mrs. Hirsch (middle right) and Mrs. Jantern (far right).