In contrast to the 1818 Bedroom, the Victorian Bedrooms for the adults and children are more ornate, filled with decorative pieces, engaging toys, and luxurious furniture.

In the Victorian era, the Cahoons, and families like them, no longer needed to be as self-sufficient as they had been before. City life was close by, and with it came stylish furnishings and expensive toys that starkly contrast with the simplicity of the 1818 Bedroom.

The parlor had to be outfitted in the most stylish decor to impress guests, however that didn’t mean the rest of the house was any less decorated. The middle-class could afford luxurious furnishings for all areas of life, including the bedroom.

The Cahoons seemed partial to the Eastlake Movement when it came to their furniture. This style was a response to earlier, more flamboyant Victorian sensibilities. It emphasized simple, shallow ornamentation with geometric and natural motifs that were easy to clean. The Eastlake Movement was triggered by Charles L. Eastlake (1833-1906) when he published his book, “Hints on Household Taste in Furniture, Upholstery, and Other Details,” in 1868. It became so popular that it was reprinted many times and went on to influence architecture. 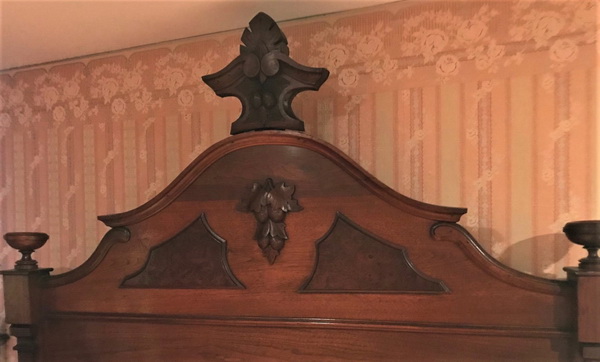 Although Charles Eastlake emphasized the role and skill of the craftsman, this simple style could be easily created by machines, much to his dismay. Manufacturers took advantage of this new style, turning out furniture that was both affordable for the middle class to buy as well as to maintain. The walnut bed, nightstand, and dressers in the Victorian Bedroom are all examples of Cahoon family furniture in this style. 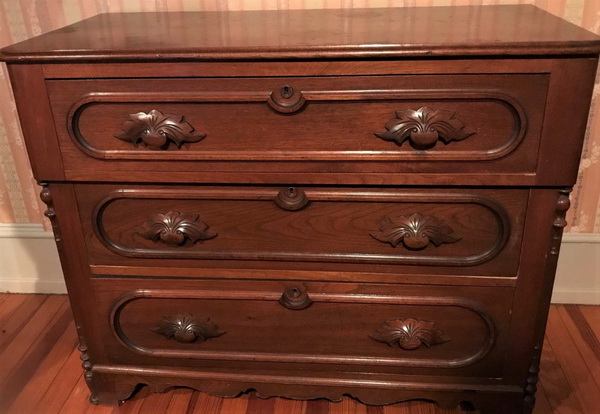 Less ornate furniture did not mean fewer decorations. The Victorian era called for decorative objects on every surface. Inspired by the French étagère shelves, the Cahoon’s ‘what-not’ shelf in the back left corner of the Victorian Bedroom was the perfect spot to display decorations such as busts, figurines, and other ‘what-nots.’ 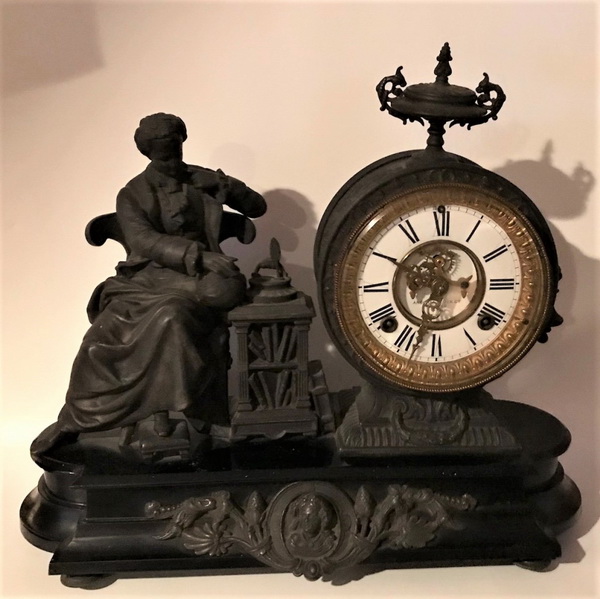 Decorative pieces owned by the Cahoon family include this Ansonia brand mantel clock featuring a spelter figure of Isaac Newton sitting on a chair.  Ansonia Clock Co. started in 1851 in Ansonia, Connecticut and moved to Brooklyn, NY in 1878. They specialized in novelty clocks such as this one that featured imitation gold and ornate cast figures of everything from athletes to angels.

The adults of the middle and upper classes weren’t the only ones who enjoyed the new products flooding the Victorian era markets. Girls enjoyed bisque porcelain dolls and accessories imported from overseas. The Children’s Bedroom is filled with period tea sets and doll furniture that would have not only inspired play but reinforced the styles and norms of behavior of the day. 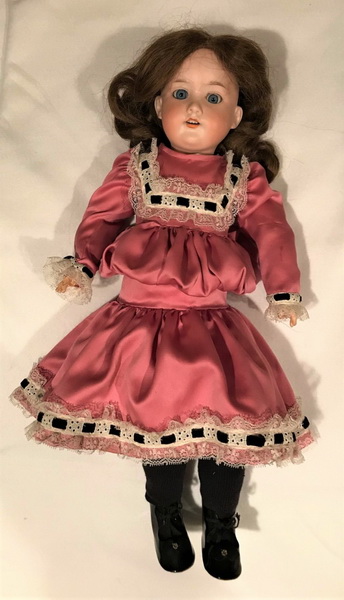 This is a prime example of an imported bisque doll that would have been available around the end of the Victorian era. Armand Marseille made bisque doll heads with mold 390, like this doll’s, being the most popular. Even though the molds were the same, the dolls could have a variety of hair and eye colors to suit the tastes of the customer. Her head would then be fitted onto a body made by another manufacturer, usually composition or stuffed fabric. The body of this particular doll is a ball-jointed composition body also made in Germany, although sometimes the bodies would be made in France or other countries. 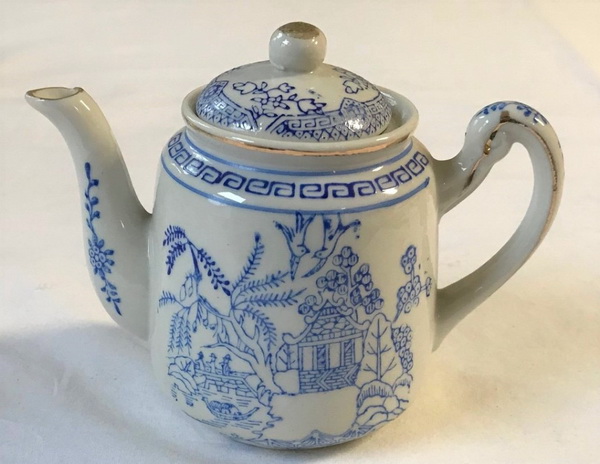 Tea sets for children got their start in the 16th century when sets were made in Germany for the young princesses of Europe. This was before porcelain tea sets, so they were often made of pewter, or even gold and silver. Thus, it wasn’t until the 19th century that toy tea sets were made available for a wider audience. The Exposition Universelle of 1855 appeared to be the turning point, where manufacturers across the world put their latest porcelain creations and toys on display. The two worlds collided and porcelain toy tea sets were now available to purchase by the middle-class.

This tea set is based on the Blue Willow design developed by Thomas Turner in 1779 imitating patterns found on Chinese porcelain, making it the epitome of chinoiserie style. This particular set was made in Japan. It includes a teapot, sugar bowl, cream pitcher, tureen, plates, tea cups and saucers. 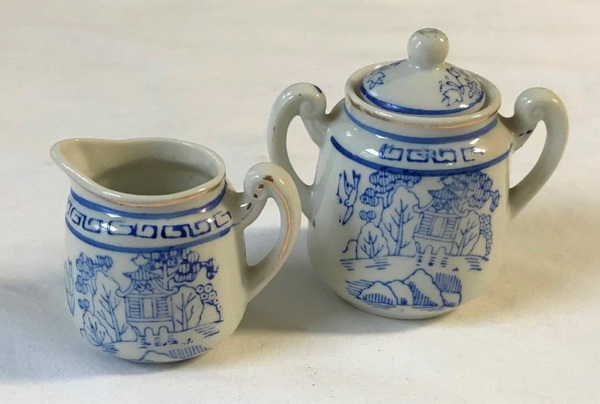