The house at 459 Cahoon Road, on the northeast corner of Wolf and Cahoon roads, was built as a result of a friendship between two sets of sisters.

The Cahoon sisters had two friends named Mrs. Pope and Mrs. Bailey. Mrs. Emma Paul Pope was the widow of the Cahoon sister’s minister, Rev. Pope, from the Methodist Episcopal Church in Cleveland. The other was Emma’s sister, Mrs. Olive Paul Bailey-Kennard. Both were widowed.

After the Cahoon sisters retired from teaching, they sold their Cleveland home and moved to the Rose Hill farm to live. In 1910, the generous Cahoon sisters built a house south of the barn to provide their friends with a place to live and for seven years enjoyed their companionship. The house was called Capoba Lodge taking the first two letters from each of their last names (Cahoon, Pope and Bailey).

The Cahoon farmland totaled 115 acres in 1919 when the Cahoon Will was probated. Wolf Road did not exit. The Cahoon’s south acreage was purchased from the Village of Bay by the Board of Education and Parkview School was built in 1922. A sidewalk was laid from the interurban stop #24 to the front door of the school for the children when they stepped off the trolley. This walkway, with trees bordering both sides, is still there today. When Wolf Road was laid out in 1926, the house at 459 Cahoon Road became the northeast corner of Cahoon and Wolf Roads. 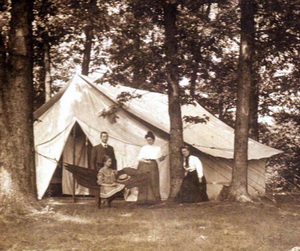 Mrs. Pope and Mrs. Bailey became the first librarians of the Dover-By-The-Lake Library located in the Rose Hill homestead house. In December 1921, Mayor Wright asked the sisters if they would start a library. Mayor George Morgan, in 1922, gave the sisters $100 to catalog the books and open a library. The stored Cahoon book collection and Mrs. Pope’s husband’s collection filled the shelves. This satisfied the stipulations of the Cahoon Will stating that the Rose Hill homestead house become a library and museum.

The will also stipulated that these ladies could live at Capoba Lodge until their death. The Village of Bay now has a library near the new school for the children to use.

Mrs. Pope was killed by a car on Lake Road, walking home from a Methodist Church service. Mrs. Bailey remarried and moved to California to be near her daughter. Their house then became part of the rental properties left by the family to generate income for the upkeep of the park.

Julia Osborn Scott was a librarian at Dover Bay Library in the 1930s. The library then became part of the Cuyahoga County Library system. By 1960, the library had grown too large for the house and a new one was built south of Wolf and Dover Center Roads. Today, the library is located on Cahoon Road on property once owned by Samuel Osborn and the Board of Education.

In 1973, the city designated monies be given for the restoration of the Rose Hill homestead house into a working museum in accordance with the Cahoon Will. It opened as Rose Hill Museum under the direction of the Bay Village Historical Society for the Christmas season in 1975. The Cahoon barn was remodeled into a community center in 1936 as a WPA project. These three buildings, along with the 1815 Ruben Osborn House, are part of the historical area in Cahoon Memorial Park today.