Washington Lawrence, who was born in Olmsted Township in 1840, attended Baldwin University in Berea, Ohio. He was an associate of Charles F. Brush, the inventor of the arc light and the lighting of Cleveland’s Public Square in 1879.

By 1886, the National Carbon Company was founded by Myron T. Herrick, James Parmalee and Webb Hays. A large plant was built on Madison Avenue near 117th St. on the west side of Cleveland. Washington Lawrence became president of the company and served until his death in 1900.

Washington married Harriett Collister and reared seven daughters. In the 1870s, he and his family enjoyed coming to the Dover-Bay Colony in Dover Township to summer in the fresh air. Washington decided to purchase three farms east of the Dover-Bay Colony. They were situated along the lake from Clague Road east to the township line and south to the railroad tracks. In 1880, he came into the possession of the Dover-Bay Colony next door and invited several prominent citizens of Cleveland to erect cottages on the park grounds.

By the summer of 1892, life was going strong at the Colony with the addition of a golf course. In 1889, Washington built a clubhouse so the group had a place to congregate.

Washington decided to build himself a fine home on his property. He chose to build his mansion in the Romanesque style popular from 1870-1890. This was a romantic imitation of the past that combined classic and gothic revival. From mid-century on, this style, with its stunning visuals, was a metaphor of great wealth and sudden success that they could create. 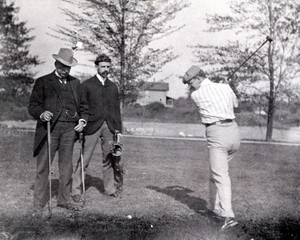 The address was 23200 Lake Road. The Cleveland Plain Dealer in “Cleveland Town Topics” reported, “The Washington Lawrences have for several weeks been occupying their splendid new mansion at the Bay… April 29, 1899.”

The mansion contained three sitting rooms, a library, a beautiful dining room, a kitchen, and a massive hall and stairway that led to eight bedrooms on the second floor. The third floor featured a ballroom, two bedrooms, an enormous linen closet, and the servant’s quarters. A section was reserved as a sewing room for the people who came a few times a year to make the family wardrobes. On the opposite corners of the house were two octagonal rooms. The sunroom was on the first floor, and the sitting room off the master bedroom was on the second floor.

The home, unfortunately, was not completely finished before Mr. Lawrence’s death in 1900. While inspecting the workmanship of his new home one day, he fell from the second floor. Having survived this fall, he died months later from an illness. Mrs. Lawrence remained at the house with one of her daughters, Ella, and her husband, William Matthews. It remained in the family until the 1940’s.

In October 1948, the Cleveland Osteopathic Association purchased the old Lawrence mansion to accommodate its growing hospital. They moved from Cleveland to Bay Village and operated an 85-bed hospital with modern facilities. The Richard Sheppard Sr. family was in charge of the hospital. In 1952, a west wing was added. This was a successful business for many years. The hospital closed about 1979, and the mansion building was converted into the main building of the Cashalmara (“Stone House” in Gaelic) condominium complex.

The Lawrence Mansion is on the National Register of Historic Places.