In this week’s Glimpse of the Past, we are exploring our collection of stereographs and stereoscopes, credited by some as the very early precursor of modern day virtual reality technology.

Viewing photographs through a stereoscope was a wildly popular form of entertainment in America and most households in the 1800s and early 1900s owned one. 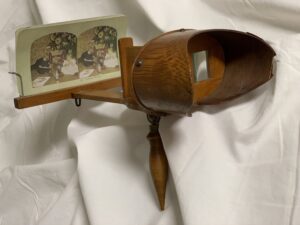 The style of stereoscopes in the Bay Village Historical Society collection are used to view a stereograph card that is comprised of two photographic images. The images are placed side-by-side to create the illusion of depth to the person looking through the lenses of the stereoscope. This is done by taking two images of the same subject, offset by the same distance as human pupils (about 2 ½ inches). The viewer’s left eye views just the left image and the viewer’s right eye views only the offset right image. After taking a little time to adjust your eyes, you will soon see the images appear as one image in a 3-dimensional effect.

The original concept of “binocular vision” was first studied and described in 1838 by English scientist Charles Wheatstone (1802-1875) who demonstrated the concept by constructing the first stereoscope using mirrors. Scottish scientist Sir David Brewster (1781-1868), already known since 1817 as the inventor of the kaleidoscope, saw great promise in this new invention. He improved upon Wheatstone’s design by making the device portable, adding lenses and dispensing with the mirrors. By the 1850s stereograph images were produced inexpensively and in massive amounts by companies such as The London Stereoscope Company. In about 1860, the American poet and physician Oliver Wendall Holmes (1809-1894) designed a popular version of the stereoscope viewer for the public that was a simple, hand-held device. This more convenient style of stereoscope became the most used in American homes and is the type we have in our collections at the Bay Village Historical Society.

Now, in the comfort of his or her own home, the average American could see sights in more near realistic depth of vision of everything from the spectacular and exotic, such as the Great Pyramid of Giza, to the smaller and more intimate, as in scenes of family life. They could take the viewer into a historically significant event, such as images of the President McKinley funeral in our collections. They might be printed in a series to tell a story or to educate, as in our collection of cards that tell the story of the life of Jesus Christ. They may include additional information on the backside or another view at which to gaze. The American stereograph publisher Underwood and Underwood was the biggest in the world and at their height, produced 25,000 views a day for public consumption. We own at least one of their cards in our collections.

Stereographs became less popular as the 20th century moved on but we still have important uses for 3-D images today in such uses as microscopy, and even to train surgeons and pilots. Brian May, member of the rock group Queen, has for decades been an avid producer and promoter of the art of stereography (3-D photography) and has recently produced several books on the subject, complete with included viewers.
We hope you enjoyed this glimpse into a popular pastime from days long gone. We only wish you could view them here as they were meant to be seen, through the lenses of a stereoscope viewer. 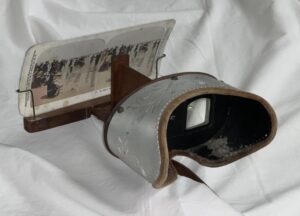 1997.L.004 Wood and metal stereoscope (with copy of stereograph inserted)

Examples of stereoscopes and stereographs can be seen in person at the Rose Hill museum, which is open on Sundays, April-December, from 2:00 to 4:30pm.

We are working hard to preserve and be able to share objects and images such as these with the public but we need your help. If you enjoyed this post, we ask you to consider donating to or becoming a member of the Bay Village Historical Society at http://www.bayhistorical.com/support-us/#Donate. If you’d like a more hands-on experience, consider volunteering by contacting us at (216)386-5997 or email info@bayhistorical.com.

Information for this post was taken from the following sources:
Thompson, Clive. “Stereographs Were the Original Virtual Reality.” Smithsonian Magazine, October 2017
Christie, Ian. “The 19th Century Craze for Stereoscopic Photography.” lecture at Gresham College, February 2018
Pellerin, Denis and May, Brian. “Stereoscopy: The Dawn of 3-D.” November 2021

Posted in Blog, Glimpse of the Past and tagged stereograph, stereoscope.