2022 marks the 100th anniversary of the building of the Parkview School in Bay Village. It was located on the spot where the Bay Middle School parking lot is now.

The Bay Village Historical Society records indicate that by 1921 there was one remaining schoolhouse in Bay Village, the “Little Red Brick Schoolhouse,” built in 1869 and located between Bassett and present-day Huntington Park at 29503 Lake Road. There wasn’t enough space at the schoolhouse, even for its grades 1-8, and from the earliest days of Bay Village history, families who wanted their children to have a secondary education were forced to send them to either Rocky River, Lakewood or what is now known as Westlake.

Bay Village historian, Kay Laughlin, wrote of the beginnings of Parkview School. She noted that in 1921, the Bay Village school system had to rent a room in Bay Village City Hall in order to accommodate the fifth grade class. In a special election in April of that year, the Board of Education managed to pass a five-mill levy to support the $225,000 in bonds needed to construct a new school. Still, expenses to build were cut in every way possible, including the risk of using non-union labor, which stopped construction completely for a time. 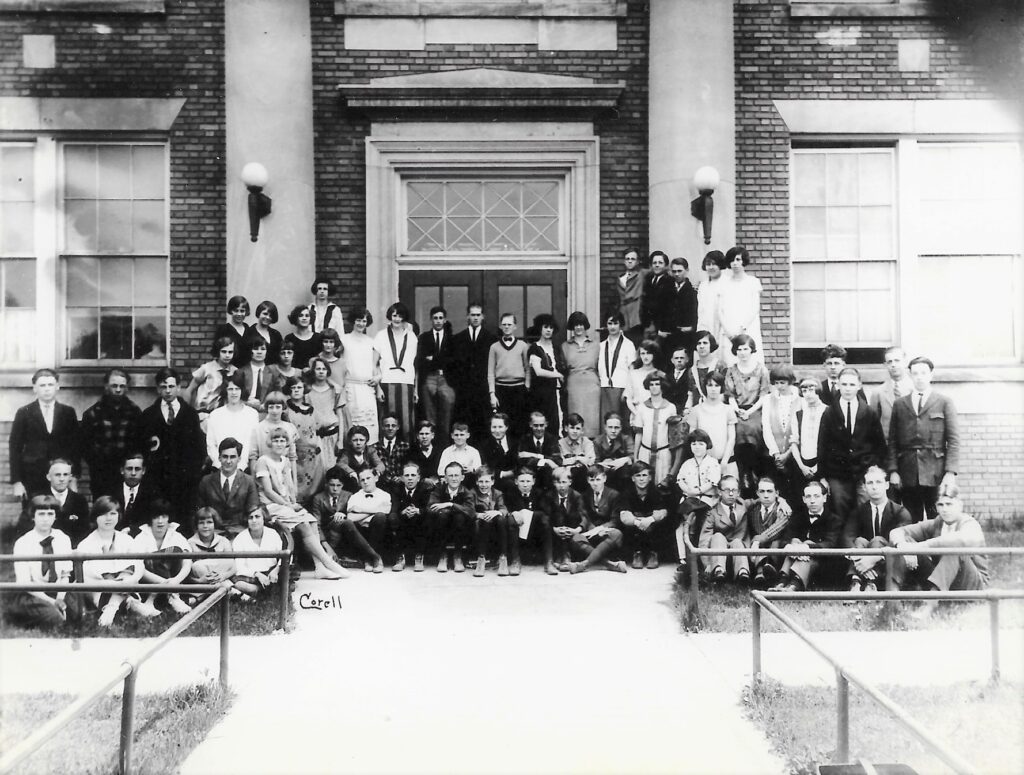 A two story Parkview before the third floor addition, from the May 1925 school publication, The Larynx 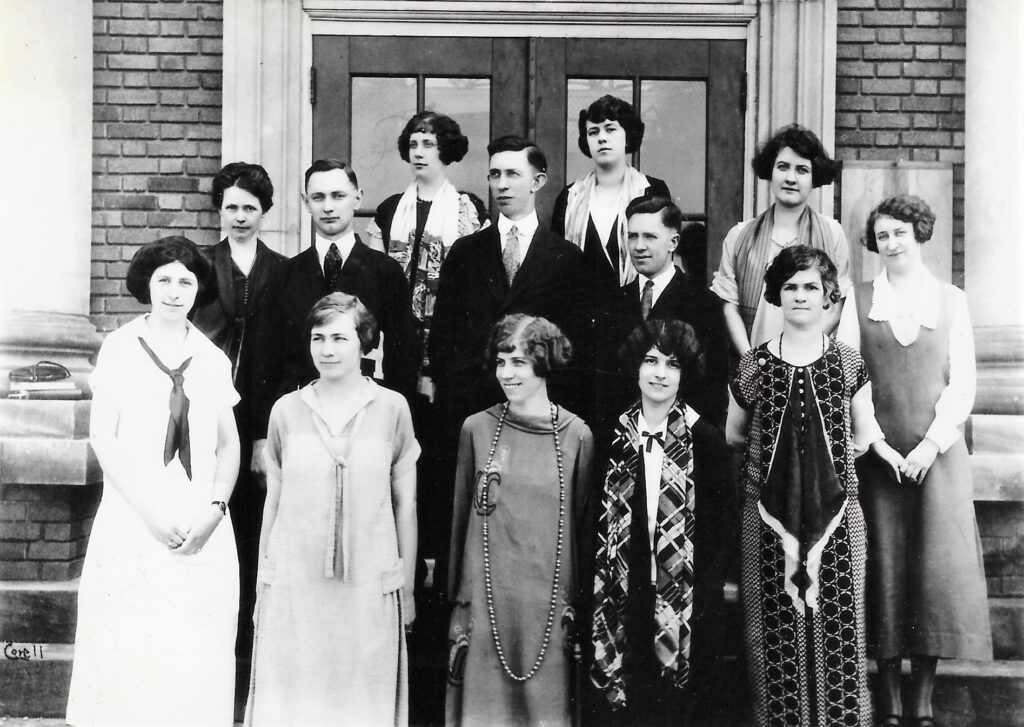 Parkview faculty photo from the May 1925 school publication, The Larynx.

By the fall of 1922, Bay Village had all of their students in grades 1-8 at the Parkview School. Mentions to upper grades are not made in The Larynx (May 1925), the earliest Parkview publication the Bay Village Historical Society has in its collections. Grades 9-12 were most likely added on, one grade a year, until by 1927 Parkview High School had its first graduating senior high class.

The first graduating class at Parkview consisted of ten girls and five boys. The lack of male students proved to be a challenge for dancing partners and so the class decided to forego a traditional prom and created a “Junior-Senior Banquet” instead. The second annual banquet lists a food menu and musical performances by the students and faculty. 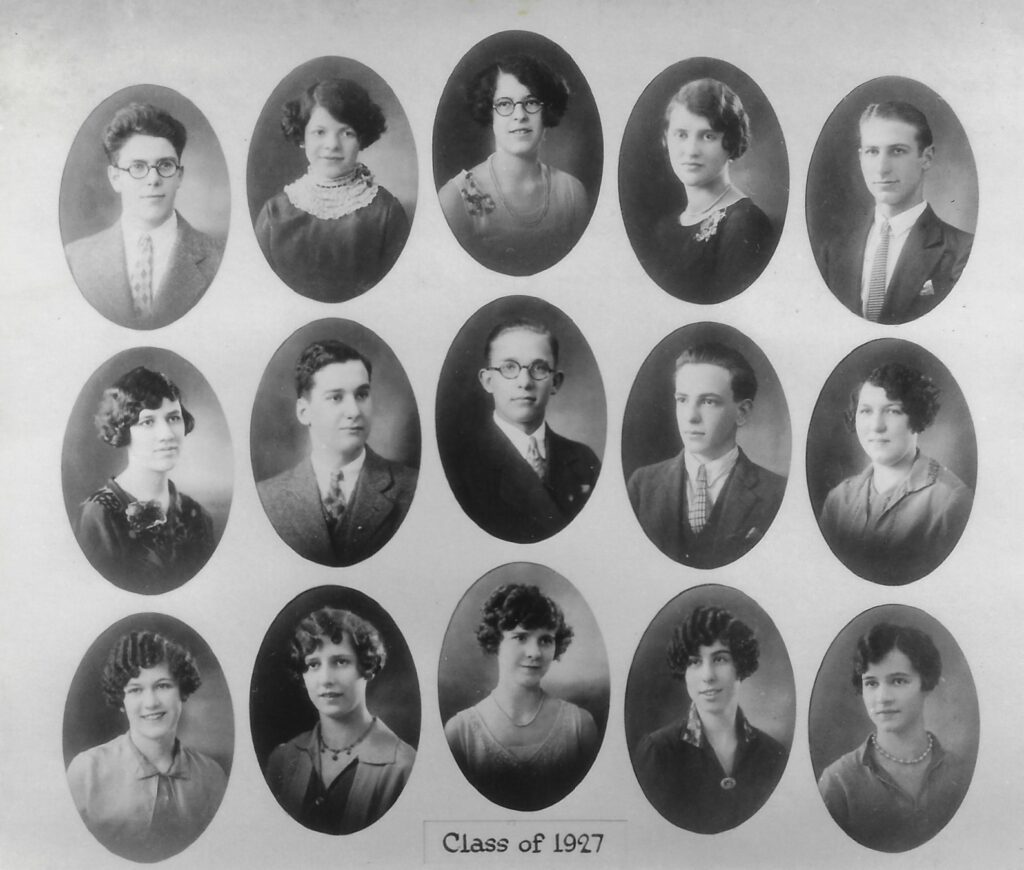 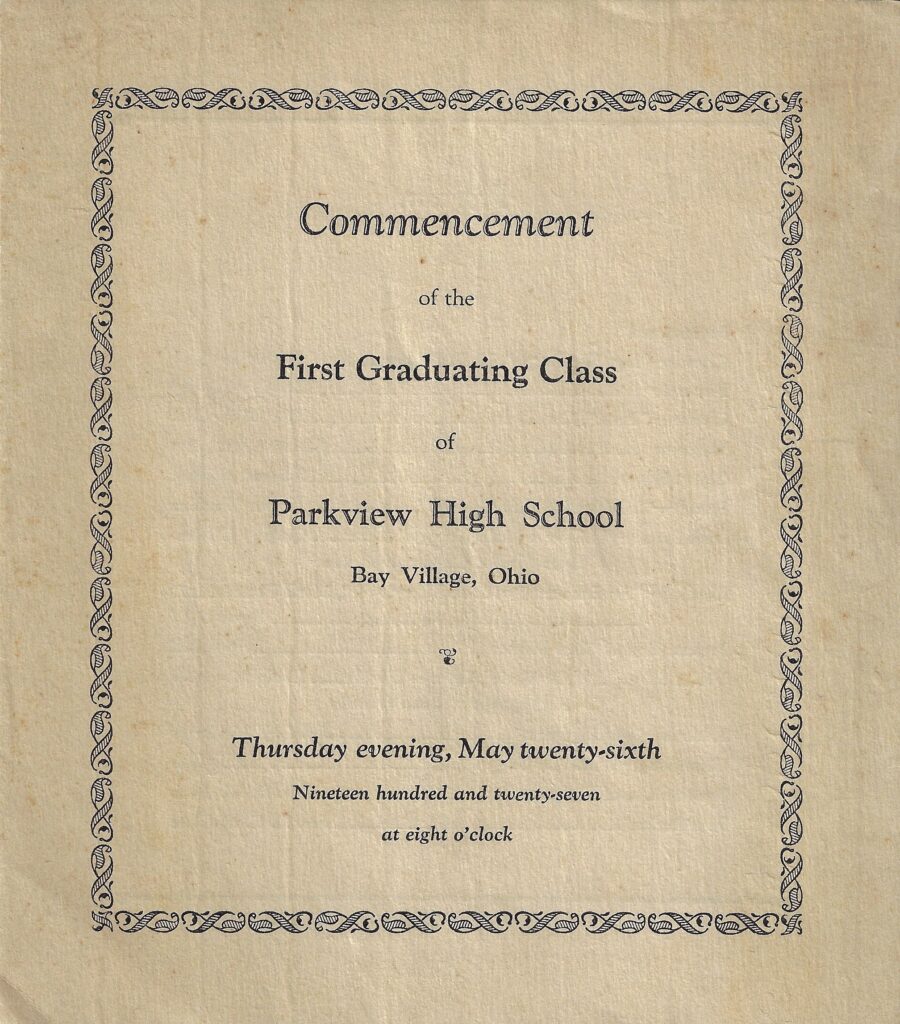 Vera Wuebker was a member of Bay Village’s first senior graduating class. She commented in the March 29, 1968 edition of the Bay Window that the limited number of students in Bay Village’s first senior graduating class was enjoyable. She is quoted as saying, “One became better acquainted with all of the students in the school.” Vera was also the daughter of West Dover’s first rural postman, Ernest Wuebker, and we have many items that once belonged to Vera in the Bay Village Historical Society’s collection that were generously donated by her grandson Kip Fanta. Vera married Herb (Irwin) Fanta in 1936 and worked in the guidance counselor’s office at Bay High School in later decades.

It appears that from the beginning of its use the school wasn’t big enough for all of the children in Bay Village. A third story was added in 1925, only three years after the building was first constructed. Temporary portable buildings were constructed before that addition but remained and were used until a wing on the west side of the building was opened in 1952. Forestview Elementary was constructed in 1927 at the southeast corner of Wolf and Forestview Road and housed the elementary students living on the east side of Bay Village, which may have alleviated some of the crowding.

The 1927 edition of the school publication Arc-Light lists the Parkview building as containing 13 standard classrooms, an auditorium that seated more than 430, a physics laboratory, chemistry laboratory, large library and gymnasium. Four portable buildings housed domestic science, manual training (shop class), a cafeteria and a dining hall in a corridor connecting the portables with the main building. There were 10 acres developed as a playground and athletic field. 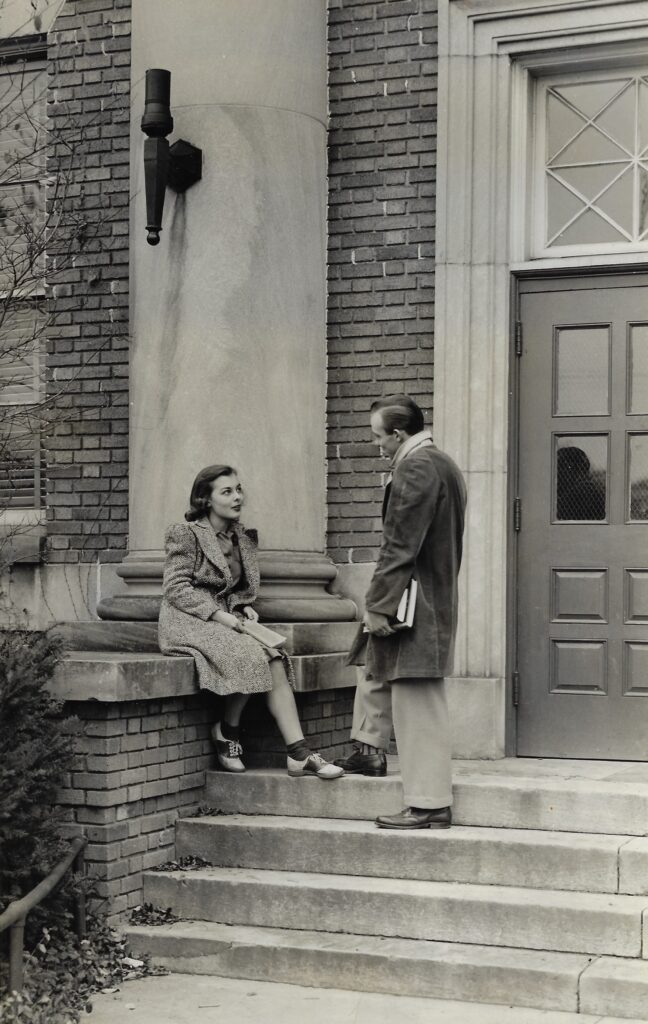 By the 1940s, many new changes were made to the Parkview classes. In 1941, Parkview added a kindergarten class to its 1-12 grade building. In 1947, Parkview began housing grades 7-12 only. Glenview Elementary, which opened in 1947, and the existing Forestview Elementary would now house all of Bay Village’s K-6 grades. 1947 was also the year the high school class officially renamed themselves Bay High School, although they used this name as early as 1941 in the Bay Blue Book. “Rockets” became the name of the school’s athletic teams through a vote by the student body.

By 1960, Parkview held only high school students when the Bay Junior High School moved to a brand-new building located where the present-day Bay High School now stands at 29230 Wolf Rd. In 1968 the high schoolers took over the location and the junior high classes moved back to the old Parkview building to stay for more than 30 years. 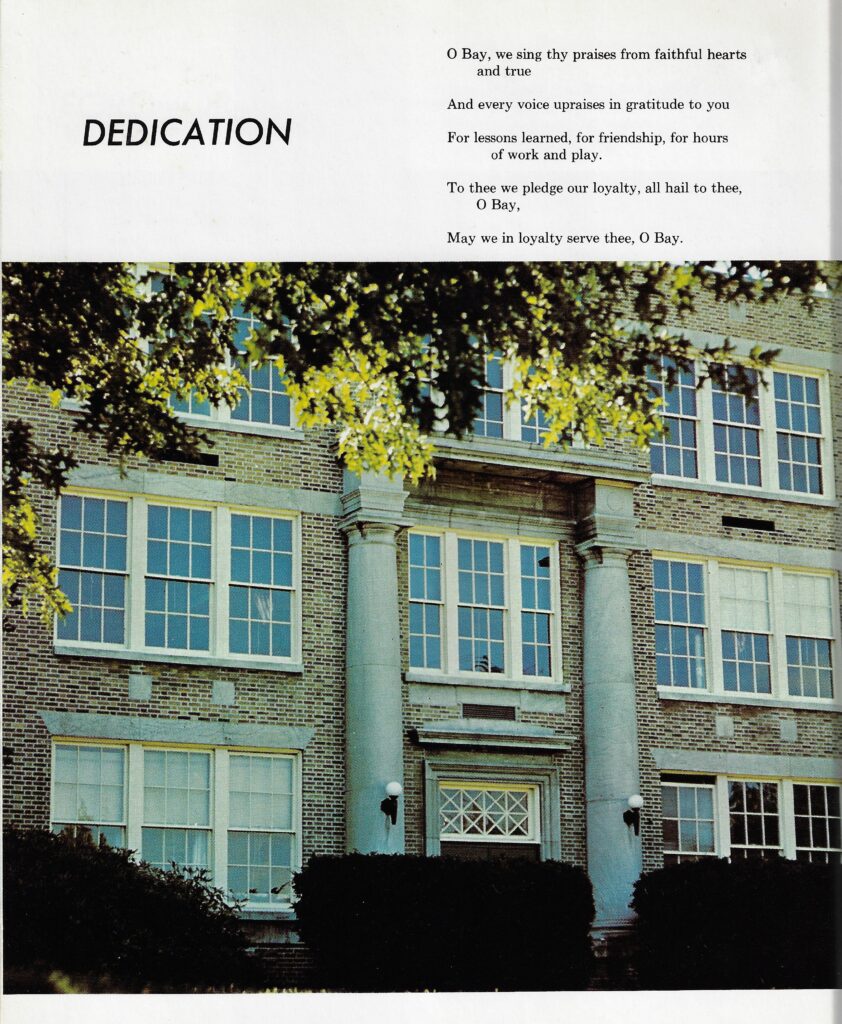 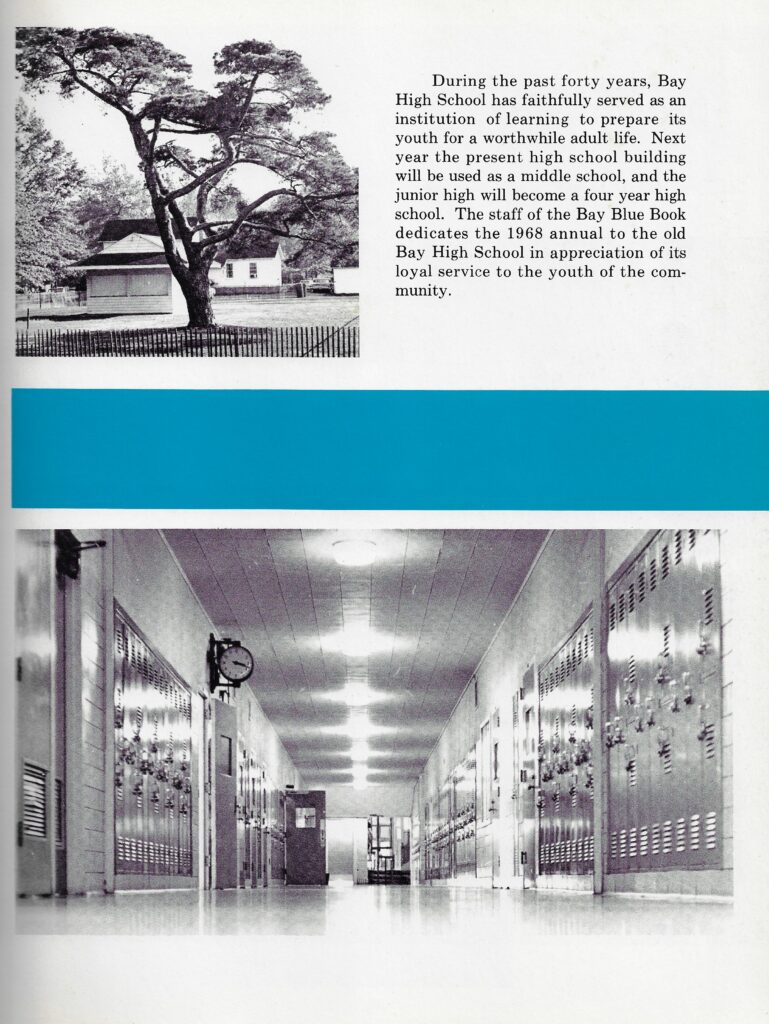 In November 2000, residents of Bay Village approved a bond issue for the construction of a new middle school. The current Bay Middle School location at Cahoon and Wolf Road was built directly behind Parkview and was ready for middle school students in grades 5-8 to attend for the 2003/2004 school year. 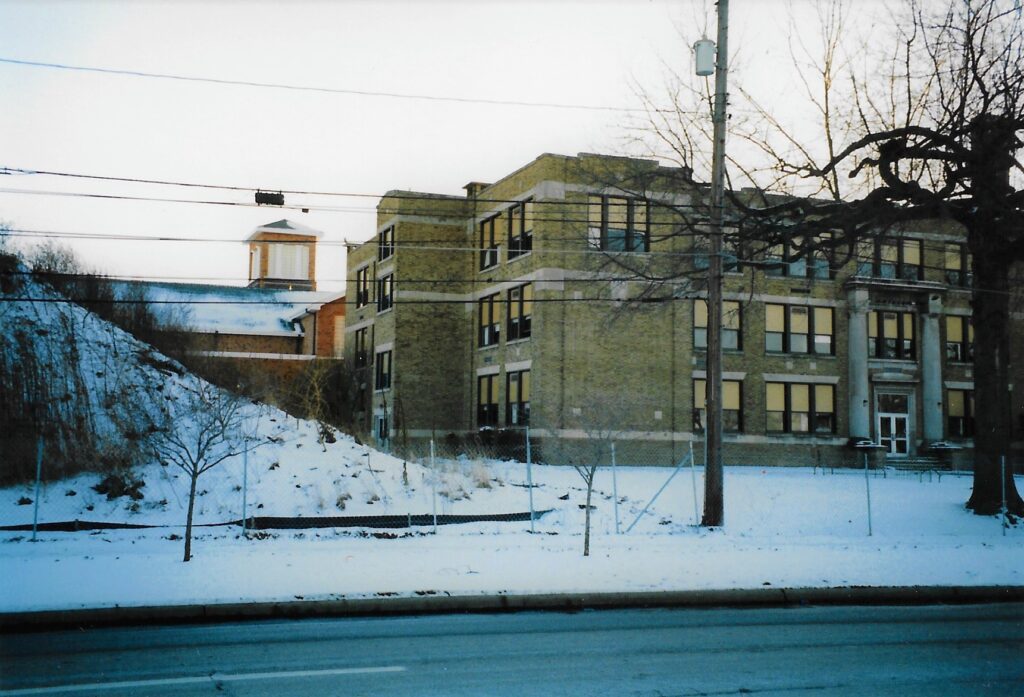 Before the old Parkview building was torn down there were several send-offs and chances for former students to relive their time at the school. On Saturday, December 13, 2003 Bay residents had the opportunity to attend some farewell events.  A “Wrecking Ball” dance was held in the gym. Although much of the equipment and furniture was moved throughout the district’s schools and the remainders were sent to a school in Haiti, there was also a sale where residents and school staff members could purchase a piece of the old school. A former student from the 1960s bought a handrail. One man bought a water fountain and urinal. A current eighth grader even expressed interest in buying his old locker. Marble partitions found in the 1920s restrooms could be had for $50.

George Serb, an 88-year-old former student (class of 1933) and Bay Village Citizen of the Year remembered entering Parkview as a second grader when the building first opened. He was given the honor of symbolically locking the building for the last time.

On December 22, Parkview alumni, current students, staff members and neighbors gathered across the street from the old school to spend a day-long vigil watching Parkview be demolished. 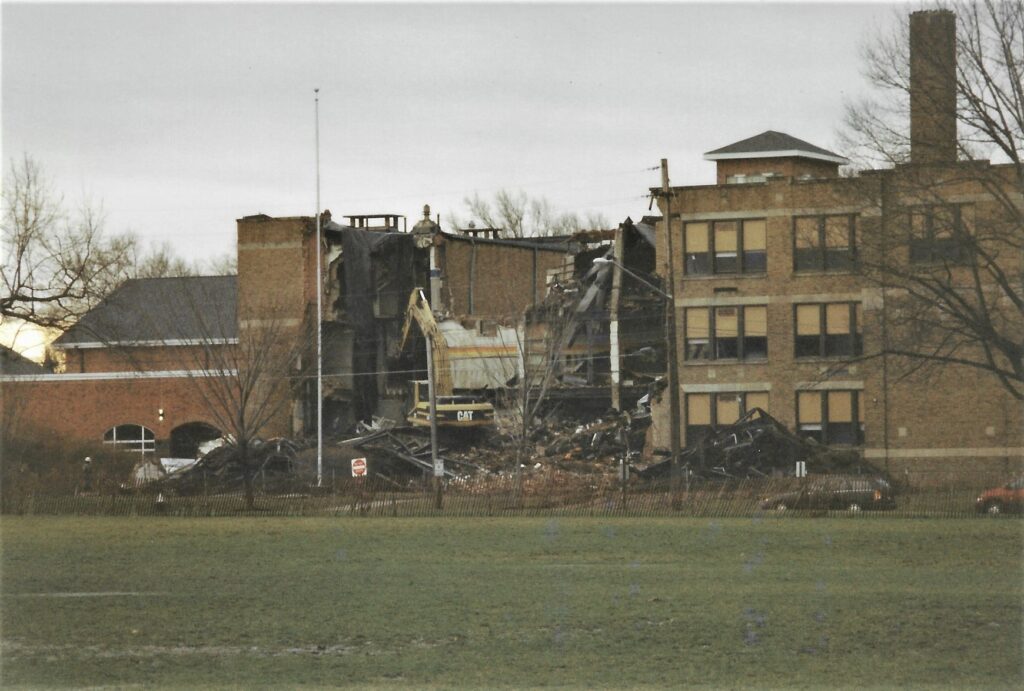 Parkview during demolition, December 2003, Bay Village Historical Society. Note the red, orange and yellow stripes above the lockers on the second floor.

You may still relive some of Parkview’s past by visiting the Rose Hill Museum to see in person a small display of items from Bay Village’s early school days. At the Osborn Learning Center next door, we have copies of most Bay High School yearbooks. You may also browse the yearbooks online at: https://www.bayhistorical.com/bay-village-history/#Yearbooks

A presentation about the history of Bay Village Schools, including Parkview, can be viewed on the Bay Village Historical Society website at:
https://www.bayhistorical.com/bay-highs-first-fifty-years/

More information about Bay Village public school history can be found through the Bay Village Alumni Association and you may find their contact information on their website at: https://bayalumni.com/

If you are enjoying these glimpses of Bay Village’s past, we ask you to please consider donating to the Bay Village Historical Society or becoming one of its members by visiting http://www.bayhistorical.com/support-us/#Donate. We appreciate your support!