Summer is almost here and many friends of the Bay Village Historical Society may have plans to visit our shoreline, if they haven’t already. The Lake Erie coastline is everchanging, both by natural and man-made forces. In the archives of the Osborn Learning Center, we have many photos of fun at the beach in Bay Village from years gone by. Below you’ll find several from our collection that we hope you’ll enjoy.

As a reminder, the Osborn Learning Center is open Sundays from 2:00pm to 4:30pm with exhibits ranging from Eliot Ness and the “Untouchables” to the Sheppard murder case. It also houses various research materials from our archives for visitors.

Want more glimpses of historic fun at the beach? At Rose Hill we have swimsuits on display from the 1920s, along with other exhibits showcasing the important decade in the history of Bay Village.

Your donations and memberships help keep these artifacts preserved and accessible to all and can be made by visiting our webpage https://www.bayhistorical.com/support-us/.

If you have any questions for us or are interested in volunteering in order to have a more hands-on experience with Bay Village history, please contact us at (440) 871-7338 or email us: info@bayhistorical.com. 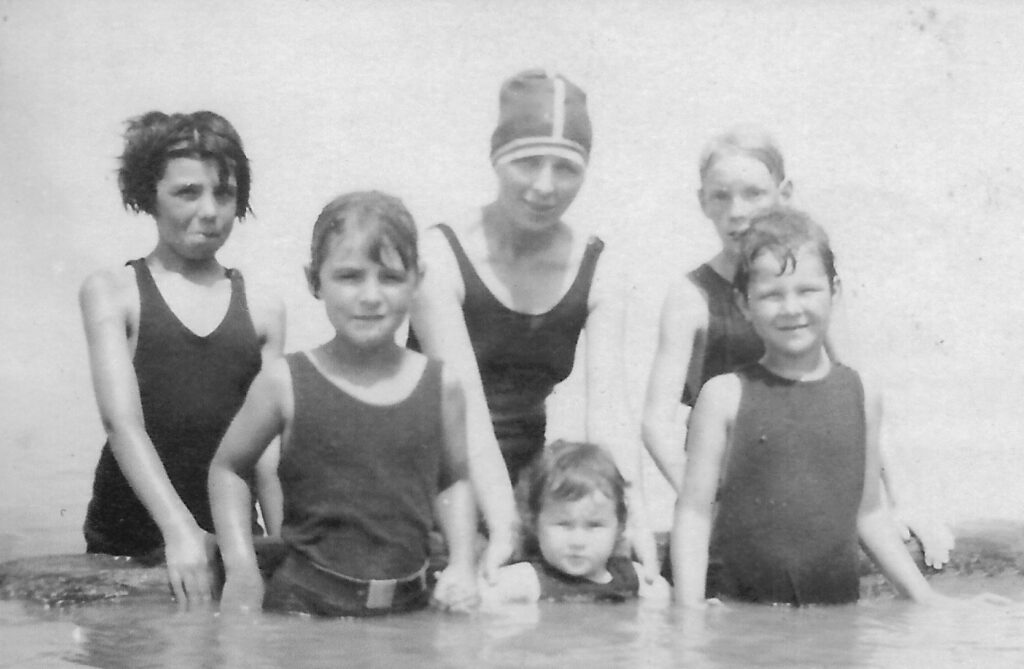 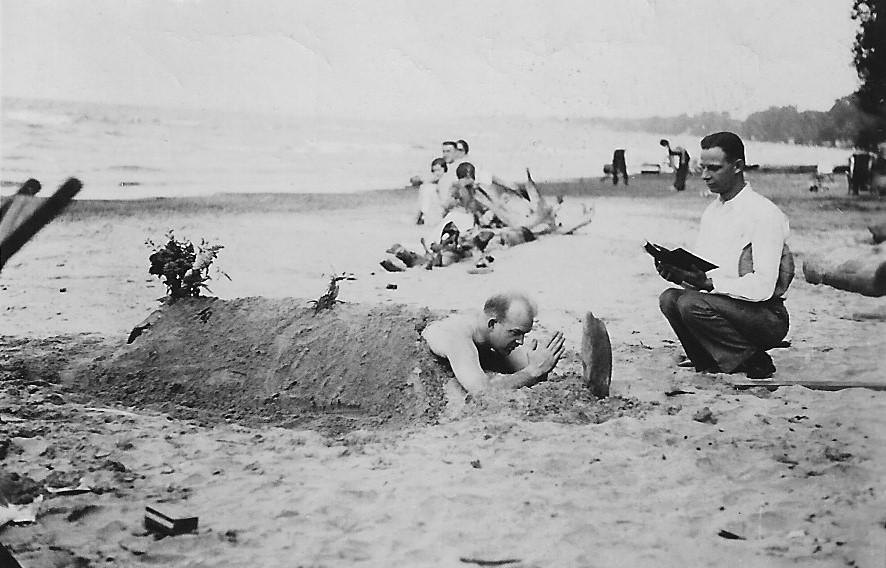 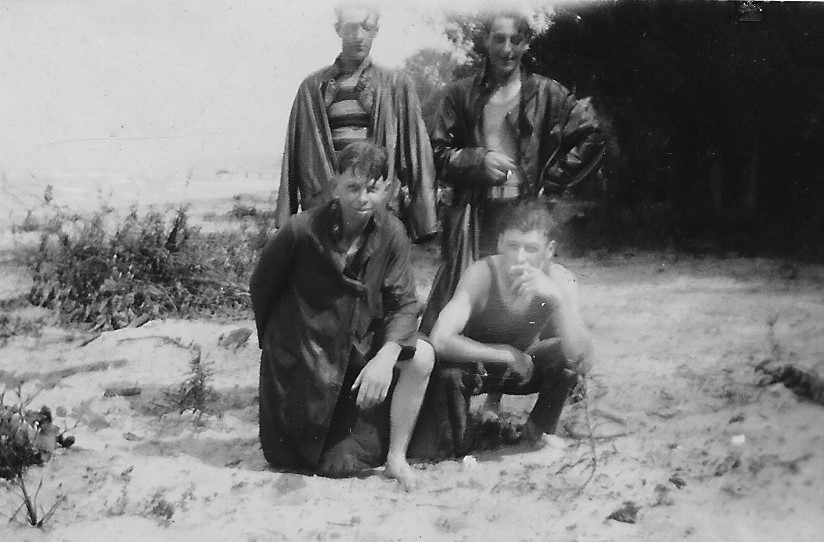 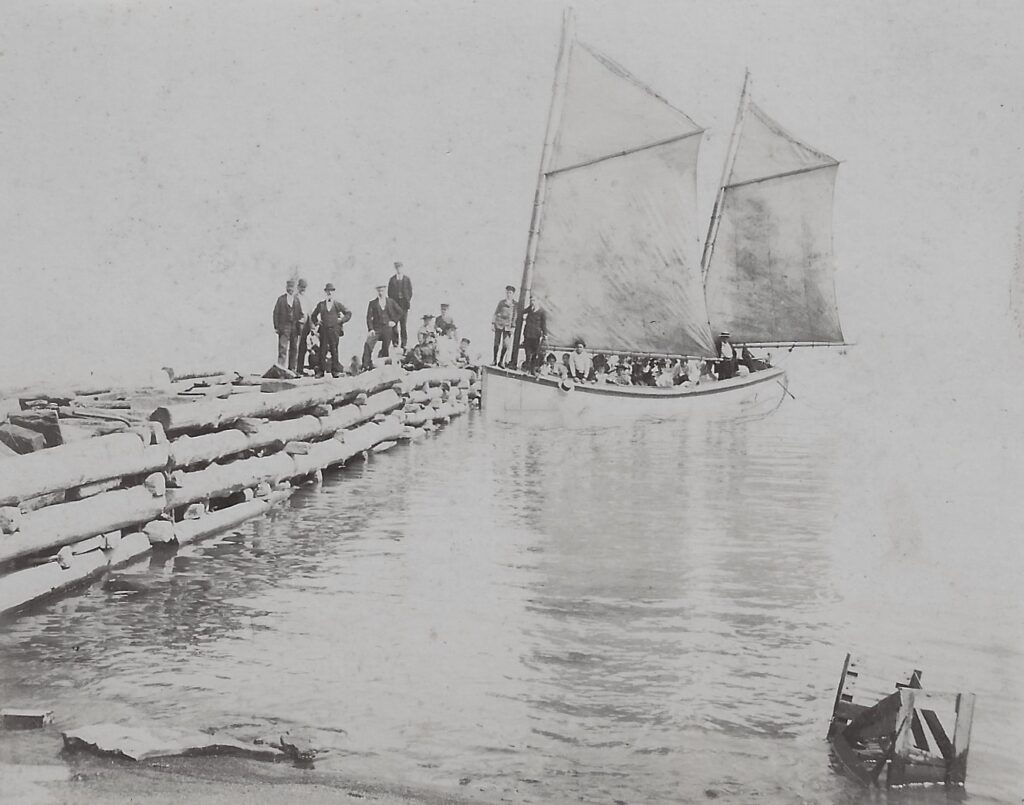 The mass influx of immigrants in the mid-to-late 1800’s included a German family in 1854 who would eventually bring a primary business adventure to Dover. Originally settling in Cleveland, Henry Wischmeyer (1832-1902) purchased a farm in 1872 that was located at 26565 Lake Road. Carrying on the tradition of grape growing, they planted vineyards on two of their acres. Within two years they built a resort hotel storing casks in the lower area with the capacity of ten thousand gallons of wine. The hotel, able to accommodate seventy guests, would become a thriving vacation spot.

The Wischmeyer family included Henry’s wife Regina (1834-1918), whose sister Caroline married Alfred Wolf, and six children, five living to adulthood. The Wischmeyer home still stands today and has been lovingly attended to for the last 150 years.

The following items come from the Wischmeyer family collection. The photograph features “Granny Wischmeyer” in the seat of a beloved family buggy. A version of the buggy was created for the family in toy form. You may view the miniature buggy at the Rose Hill Museum which opens again to the public on Sunday, April 24 from 2:00 to 4:30pm. 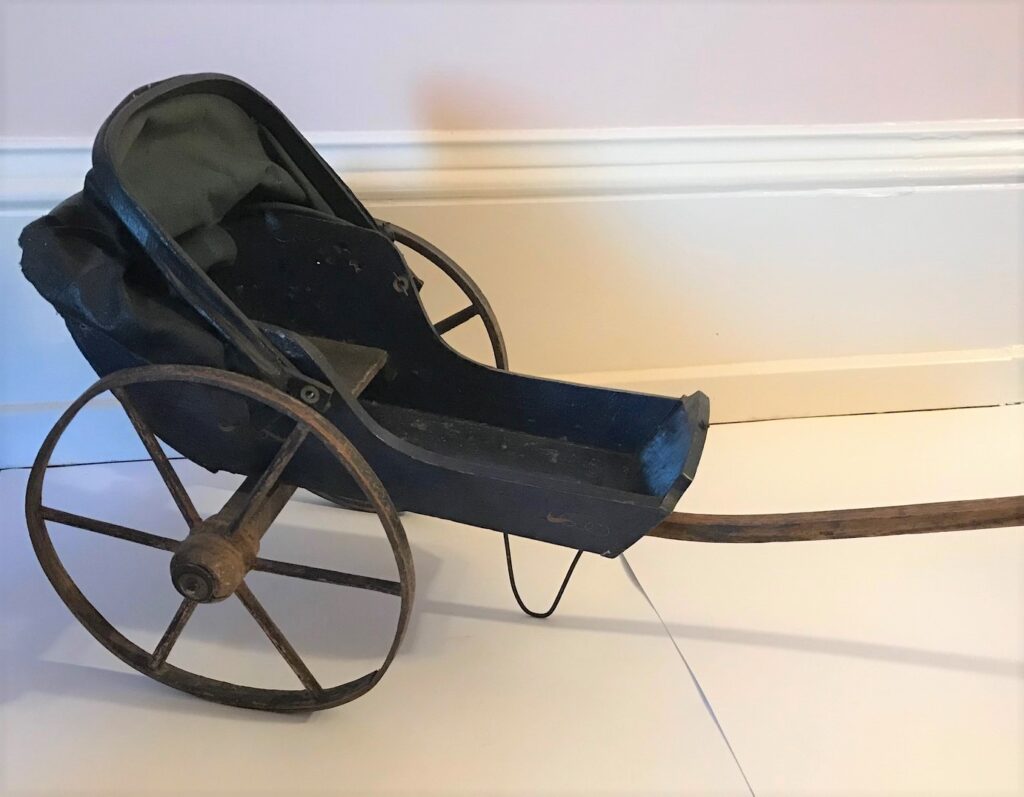 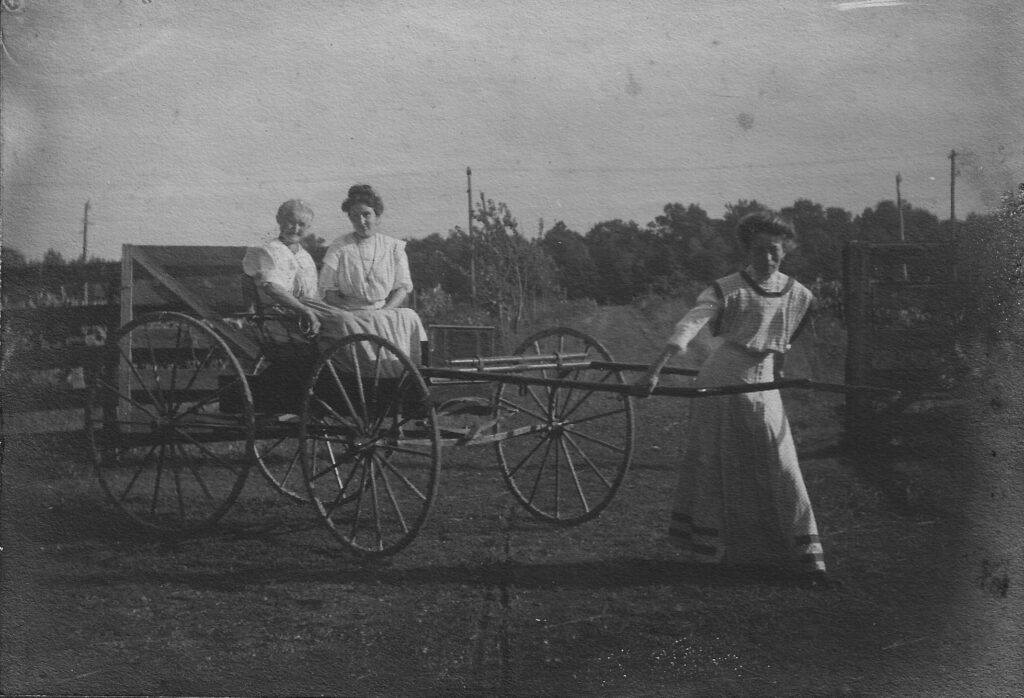 Enjoy the magic of winter!

There are so many memories attached to snowfalls of making angels in the snow, climbing over mounds of snow at the end of the driveway, sledding down hills, icicles hanging from the roof and even frozen mittens from building a snowman.  Hope you are able to curl up with a good book by the fireplace this winter, enjoy a cup of hot chocolate, watch some gentle snowfalls and reminisce.

May these pictures from days gone by, bring back some special memories that you may have tucked away. 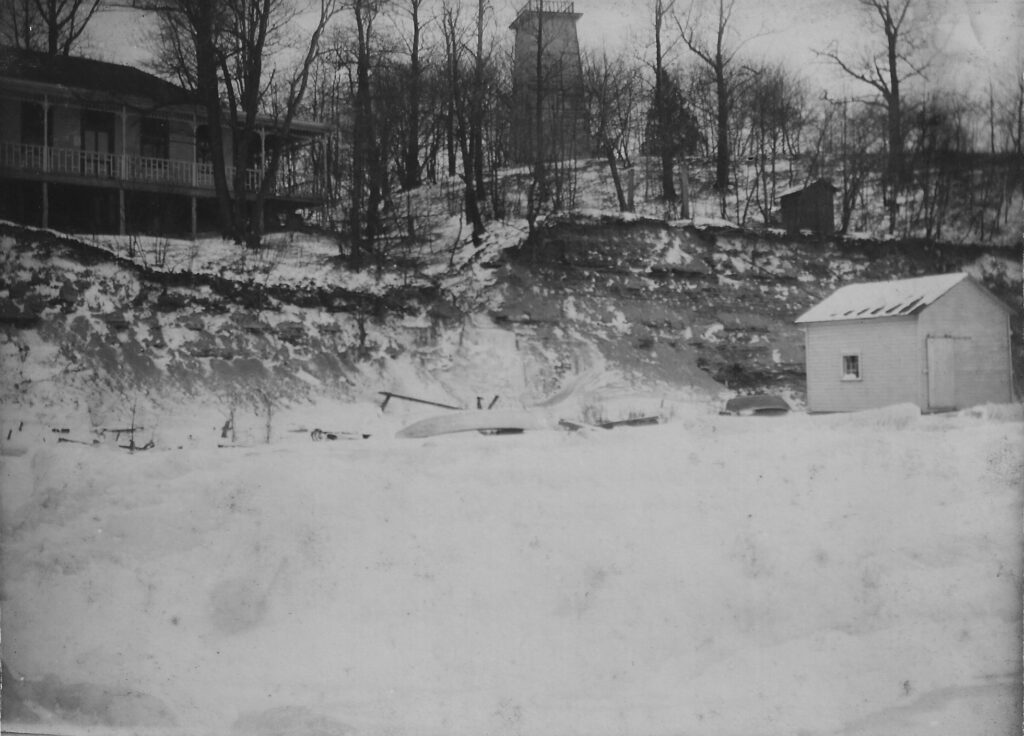 Huntington Beach Water Tower in the background of the Lakeshore Club along Lake Erie 1906, 2020.P.FIC.021 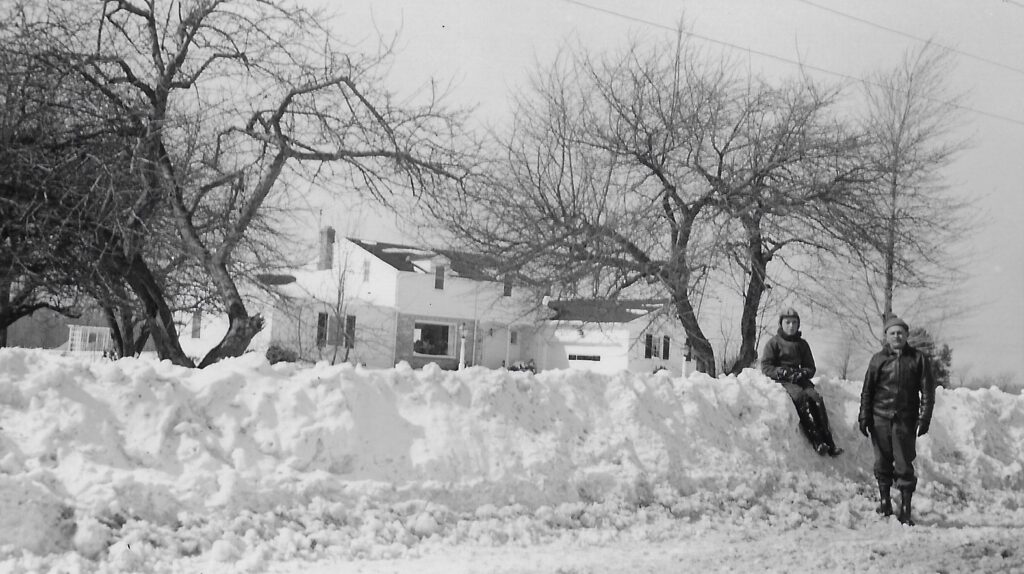 Warm sunny days and cool nights brought a migration of German people to North Dover Township in the 1850s. They purchased acreage from the Foote, Winsor, Aldrich, Eddy, Bassett and Hurst properties on the west end of Dover Township along Walker, Bradley and Bassett Roads.

Some farmed into South Dover (Westlake) extending down Bassett Road – which they called “the elbow,” as it made many right and left, 90 degree, turns around farmer’s fields – until it exited on Dover Center Road near the Center Ridge business area.

They spoke German in their homes, wore wooden shoes, and read the German newspaper. They traveled in their farm wagons to Ohio City on the near west side to sell their produce and to attend church. They constructed St. Paul Lutheran Church and school on Detroit Road. They lived a quiet and structured existence. 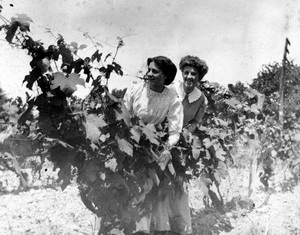 On Link Road, today Ashton Lane, a German Mission Ground was built on property purchased from David Sites. It had a pavilion and bowling alley for their entertainment. The Krumwiedes, Daviders and Kochs were excellent carpenters and built many fine Bay Village homes. The Peters ran a sawmill at Bradley and Naigle Roads, and the Starkes were landscape designers with acres planted in chrysanthemums on Bradley Road. Many of their houses still stand today as century homes.

Henry Wischmeyer Sr. arrived in Ohio City in 1854. He met Regina Rentschler, and raised a family of eight. His life’s dream was to own acreage and grow grapes as his family had done in Germany.

He found just the right place on the old Humphrey and Gardner lands, Lot #96, in North Dover Township. Today, this is the Bruce, Russell and Douglas Road area of Bay. Henry started with a two-acre grape vineyard in the 1860s and erected a family home on the south side of Lake Road near Glen Park Creek.

By 1874, he had most of his acres in grapes and had built a 10,000-gallon wine cellar on the north side of Lake Road. As the family prospered, Henry added a 70-bed hotel, pavilion and boat house. Using the train and interurban, traveling salesmen and families came to the hotel for relaxation by the lake. The Wischmeyer girls cooked the meals, and the boys worked the farm.

In 1926, Bay council passed a law prohibiting businesses on Lake Road and the hotel closed. Henry Jr. began selling lakefront lots, and soon houses were appearing where grape vineyards once stood. The Metropolitan Subdivision was developed in the 1920s.

By the 1940s, with only Henry Jr. living, the grayed hotel with its many verandas stood empty. It was burned down in 1962 by the Bay fire department. Today, only the cook house and family home remain. The vineyard east of Douglas Road was developed in the late 1950s as the Bruce/Russell Road horseshoe.

One of our Germans, Frank Meilander, gave us our name. He said, “We are a village located on a bay.”