To some it was exciting, to some, necessary, and to others, convenient.

On October 6, 1897, the first maroon deck car, a 40-foot Brill with 22.5 tons weight and a 50-horsepower motor, rolled west from Cleveland to the heart of Lorain, partly on private right-of-way track, 40 to 66 feet wide, with 70 pound rail spiked to oak ties. The Lake Shore Electric Interurban (trolley) had come to North Dover Township.

Leaving the Cleveland station at 25 Public Square, the trolley turned onto the West Superior Avenue approach to the High Level Bridge subway. Down the trolley went to the lower level. Crossing the Cuyahoga River, the trolley surfaced on Detroit Street and turned right onto Lake Avenue running downhill to Edgewater Park.

Entering Clifton Boulevard, the trolley traveled west along the tree lawn entering into mid street at the Rocky River station (Coulter’s Drug Store) at Sloane and Detroit Roads. It crossed the bridge span approaching double track right-of-way opposite the Westlake Hotel. Making a sharp ‘S’ turn at the Nickel Plate underpass, the trolley straightened out as it picked up speed through North Dover at 60 mph. 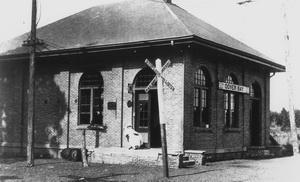 The whistle shrieking at the many crossroads, it sailed across the trestles at Cahoon and Huntington. Soon the station at Beach Park, Avon Lake, 19.7 miles from Cleveland, appeared in the distance.

School children rode to school on trolley passes paid for by the Board of Education. Commuters took the trolley to work. Butter, eggs, fruits and vegetables went to market on the trolley. The family could spend a day of recreation in the country or visit the folks in the city. Picnickers had a varied choice of spots at which to stop: Scenic Park in the Rocky River valley, Hahn’s Grove (Bradstreet Landing), Wischmeyer Hotel, Huntington Beach, Linwood Park, Beulah Beach, Rye Beach, Volunteer Bay, and Cedar Point.

In 1903, North Dover became the Village of Bay. Soon the town thought we might need another east/west road and, in the 1920s, Wolf Road became more than just an idea.

Although it made life easier, there were drawbacks. Accidents happened, some tragically. Louis Wischmeyer was killed by a trolley at Bradley Road. The Massey family lost their father who was walking the Cahoon trestle. Automobiles afforded families more independence and trolley ridership dropped off. Soon, the interurban was losing money. The last car left Cleveland May 15, 1938, replaced by the orange buses of the Lake Shore Coach Line.

Today, the right-of-way is part of our Bay Village backyards, Huntington Reservation trestle, and Electric Drive(s).