In recognition of October and fall and all things pumpkin, Bay Village Historical Society is showcasing a November 2, 1915 photo of caretaker Charles Rahl (b. 1859 d. 1948) at the old Huntington Estate farm. It was donated by Helen Osterman who was a friend of the Rahl family. Mr. Rahl is standing in front of the barn with several very large pumpkins he has grown. The weight of all four totaled 701 lbs.!

The area we now know as Huntington Beach and Reservation was once owned by English immigrant and Cleveland industrialist John Huntington (b. 1832, d.1893). Today, all that is left to remind us of the estate is the old water tower, pump house and a large carriage stepping stone bearing the Huntington name.

Huntington caretaker Charles and his wife Kate Rahl lived in a home on the property that is part of the BAYarts campus today. Residents of Bay knew to call this house before taking a swim on the Huntington property beach. Mr. Rahl would give permission, providing the Huntington family wasn’t in residence.

In 1925, Cleveland Metroparks bought the John Huntington Estate for $500,000. Bay Village residents now had one of the best public beaches of any town for miles and they no longer had to ask permission to use it.

A community theater group took over the old Huntington barn and carriage house by 1958 and converted it into the Huntington Playhouse. It burned down in May of 1970. The stage was the only feature left intact. Oats and corncobs, lodged between the floor boards, were found scattered in the rubble, a reminder of the many years the building was a working barn and stable for riding horses. At least two newspaper articles from May of 1970 in our scrapbook collection list the building as being 140 years old. If true, this would put the original build date into the 1830s, when the property was owned by Eliphalet and Margary Johnson. Eliphalet was a brother of Sarah Osborn, one of the earliest settlers of Bay Village (then Dover Township). The playhouse was able to build a new structure that would recreate the look of the old barn on the original location. The players were able to perform their first production in the new building, the musical Oklahoma!, by the summer of 1971. The structure’s newest renovations, which began in 2019 by BAYarts, are reported to continue in 2023. 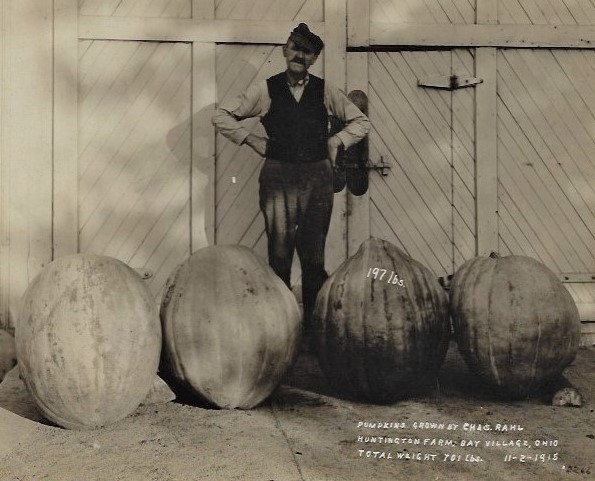 The Huntington water tower, a well-known landmark, was used to store water pumped from Lake Erie below to irrigate John Huntington’s orchards and vineyards.

Though it looks like a lighthouse, this tower was actually a water-pumping structure that served to irrigate the grounds of John Huntington’s 100-acre estate. A brick pump house was located below the tower, which is speculated to have been run on steam power. John Huntington built the water tower to house a large storage tank so he could pump water from Lake Erie and store it in the tank to provide water for his property.

He wanted it to look pleasing so he designed it to look like a lighthouse.  It was never used as a lighthouse, but Mr. Huntington did install stairs that led to the top so he could watch the lake for his freighters hauling stone in and out of the Cleveland harbor.

Huntington Reservation, on the shores of Lake Erie, was the former country estate of John Huntington (1832-1893), a prominent Cleveland industrialist and philanthropist.

John Huntington was born in Preston, England. His father was a mathematics teacher in the English school system. He made sure John had a good education. In 1852, John emigrated to the United States and Cleveland, Ohio.

He went into the roofing business with his brother, Hugh, and was successful. He soon became a respected Cleveland businessman.

At the turn of the century, many wealthy Clevelanders had homes in the city and beautiful estates in the country.

Huntington was contracted to roof an early oil refinery by John D. Rockefeller. Mr. Rockefeller offered the brothers payment in cash or stock, and John, daring to adventure a little, accepted part payment in stock. He acquired considerable wealth by this venture and eventually a partnership in the Standard Oil Company.

John Huntington was a creative individual with a lively interest in improving ways of doing things efficiently. In 1863, he took up the business of refining oil and invented many new methods. So great were the advantages from his inventions that the company outstripped all competitors. He patented several improvements in oil refining methods.

He had many commercial, civic, and cultural interests. He was involved in the oil business, a fleet of lake vessels, mining, and quarrying in the Cleveland Stone Co. John was elected to Cleveland City Council where he served for 12 years.

He also helped to initiate the construction of swing bridges on the Cuyahoga River, construct sewer systems throughout the city and build the Superior Street Viaduct. One of Huntington’s biggest contributions to the city was the Art and Polytechnic Trust which he created in 1889 to fund the establishment of the Cleveland Museum of Art. His other major trust, the Huntington Benevolent Trust, supported 19 charitable institutions in the Cleveland area.

The Huntington country house burned down in the 1920s and the Huntington barns in 1970. The tall tower on the bluff of Huntington Reservation is one of the few remaining features of the Huntington’s country estate. Although the structure looks like a lighthouse, it is actually a water tower built between 1880 and 1890. It was used to store the water once needed to irrigate the fields of the estate. Most country estates had fancy vineyards, orchards, and gardens with unusual European botanical specimens. The Huntington estate was no exception.

The tower is made of cypress wood, but today, the outside has been covered with siding. The original water pipes, stairway, and water tub enclosure still exist inside the tower.

John liked to sit on top of the tower and watch the sun set. If you look down the beach below the tower you can see another original Huntington structure, the brick pump house, which contained the steam engine used to pump water from the lake to the tower. The “H” for Huntington is still on the outside of this brick building. Also in the park is the Huntington stepping stone used when stepping in and out of a carriage.

Cleveland Metroparks purchased the 98.76 acres of Huntington Property from the Union Trust Co. in 1925 for $500,000. Today, it is Huntington Reservation.