This April, 2022 was bittersweet with the grand opening of the new Bay Village Library. Although there was great anticipation and excitement for the beautiful new library, there was also some sadness because in order to build it, an old building beloved by many for decades had to be removed. That building was the Bayway Cabin.

This past week I had the pleasure of speaking with Mr. Bob Reid and his wife Gail, members of the Bay Village Historical Society, just as he and his old classmates were preparing for their belated Bay High School class of 1956 reunion celebration. I had called him to get more information on the old Bayway cabin when he informed me that actually his family and classmates played a big part in the making of the youth center in Bay. Thanks to Bob’s recollections and papers and photographs in the Bay Village Historical Society archives, we were able to put together the early history of this community center that served the Bay community for almost 60 years.

A Bay Village Youth Cabin Committee Report from March, 1951 lists that there was interest in a center just for youth activities in Bay as far back as 1943 when a Bay Village Youth Center Committee raised $1,200 towards that effort. The only places to use for non-school youth activities were the local churches or the Community House (old Cahoon Barn, now Bay Rec. Center Offices) and it was usually filled up with adult events. The community wanted space dedicated to the youth in Bay. Unfortunately, World War II intervened and the committee decided to convert the money it had raised into war bonds. After the War, in 1948, the Recreation Board drew up plans for a recreation building and submitted a $100,000 bond issue to the voters. It did not receive enough votes to pass and the idea of a center for Bay youth again looked hopeless. 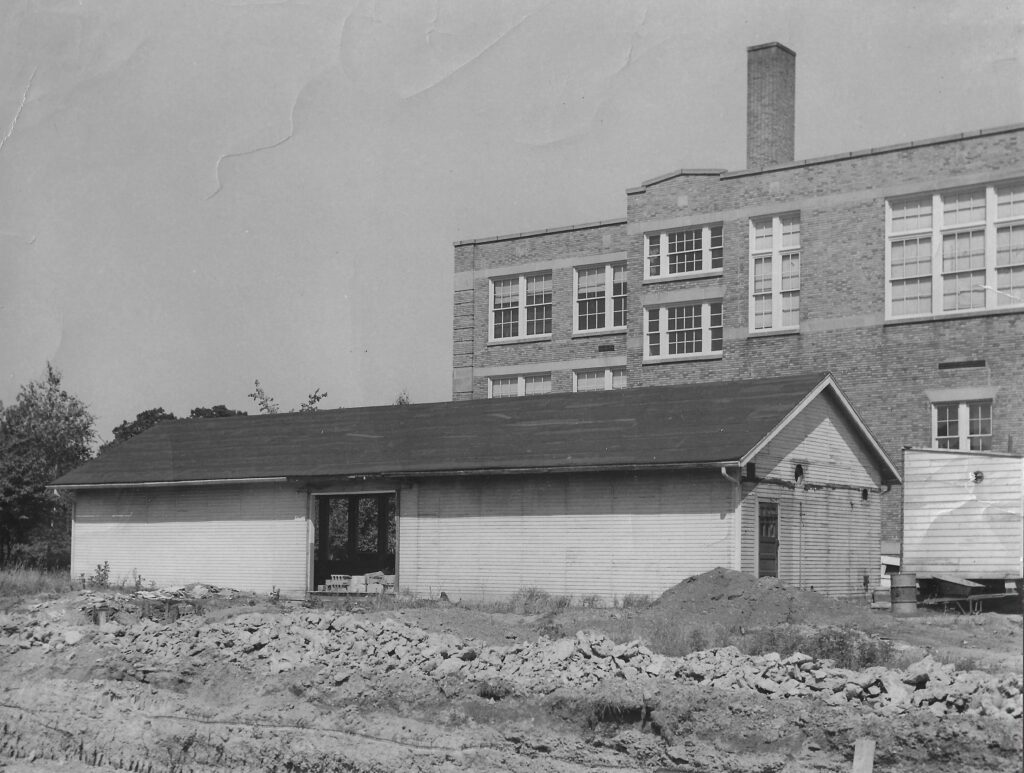 Fate stepped in, or rather the Board of Education secured approval of a bond issue by 1950 to build a permanent addition to the high school (the old Parkview School Building where Bay Middle School now stands). A temporary addition that had been built there possibly as early as 1924 before a third story was added in 1925, needed to be moved out. It was one of two temporary buildings on the west side of the school and had most recently been used as the school cafeteria. The structure was a 24 by 70 foot shell with a leaking roof and sagging floor but at least one high school student saw its potential and knew the best adult to help make the idea a reality. 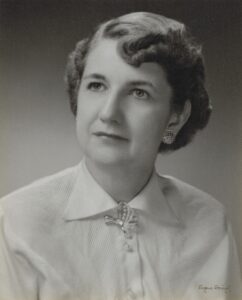 Ester Reid circa 1950s, from the personal collection of Bob & Gail Reid

That adult was Ester Reid, the Secretary of the Recreation Board, Bob Reid’s mother and a leader in many activities for the betterment of Bay Village. Through her, the idea took off to move the old building and renovate it to be used as a center for the town youth. 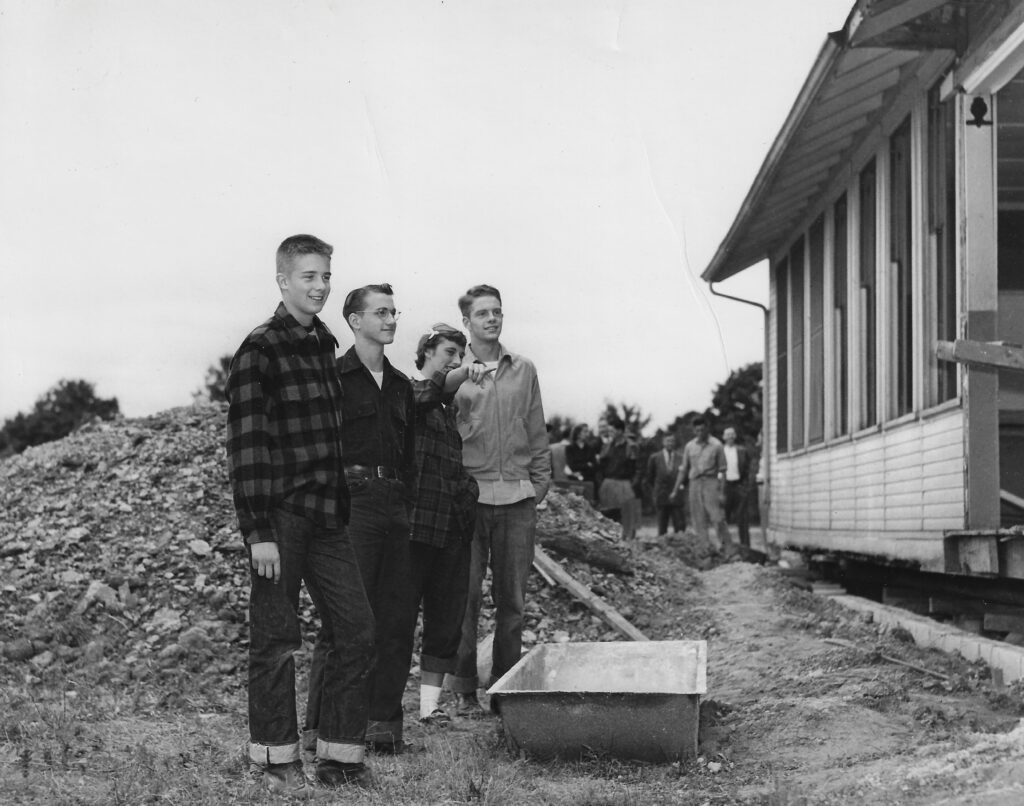 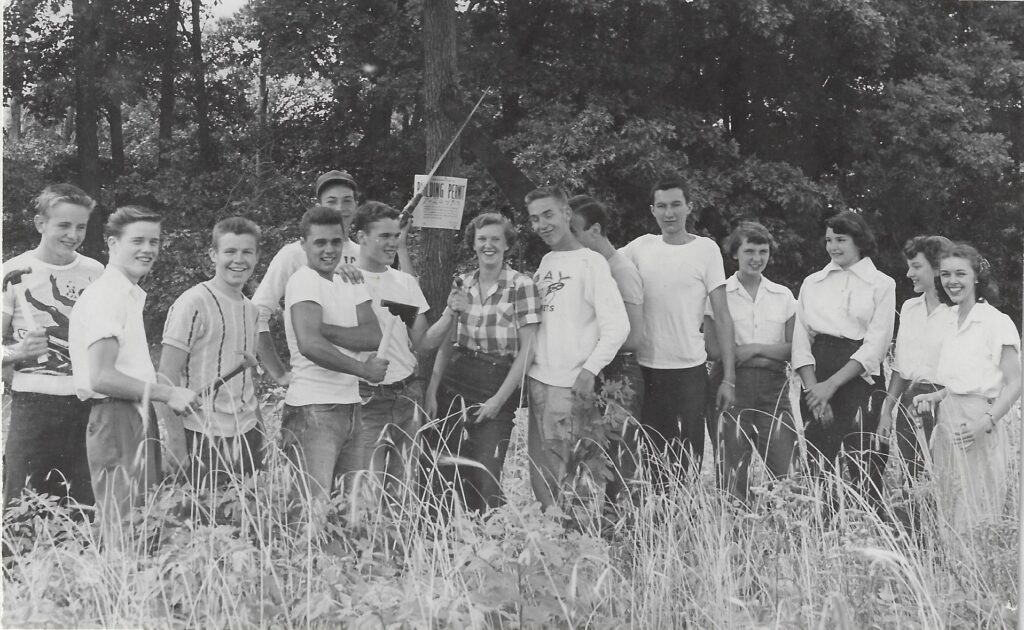 The Recreation Department sent out invitations to all of the clubs and organizations in Bay Village, asking each to send a representative to a meeting to discuss the need for a youth recreation center. The local Kiwanis Club Youth Service Committee Chairman, Raymond D. Kraus was soon talked into organizing the project, devoting much of his time outside of his regular employment to the task of forming the Youth Cabin Committee of the Bay Village Recreation Board. Chairman Kraus and Secretary of the Committee, Mrs. Norman L. Reid (Ester Reid), it is noted in the records, were the two members who made the most tremendous sacrifices of time and effort, inspiring and organizing the work of a long list of people to bring the community project to a successful completion. There were soon mailings and a house-to-house canvassing for funds to move and fix up the old cafeteria building and turn it into a youth center. Materials, labor and time was donated by many in the community. The building was able to be moved to its new location in September, 1950 and by March 22, 1951, it was finished and turned over to begin activities under the Recreation Board of Bay Village which held many youth activities there, including dances, youth group meetings and even a nursery school. The new youth center was named “Bayway” from a winning submission by student Skip Worley, in a naming contest held throughout the Bay Village School system.

The Lakewood Post on March 24, 1951 gushed with admiration “It is hardly necessary to emphasize the importance of providing attractive, well-regulated recreational facilities for youth. The average boy and girl in Bay enjoys advantages that are considerably above average. But no set of advantages can replace the need for a center where youth may gather for a healthy good time; which will serve as headquarters for organizations and activities, which will promote friendships and sound social relationships. It indicates growth of civic consciousness, of community character. In getting together to make possible the realization of a project calculated to benefit youth of the community, adults did fully as much for themselves as they did for their boys and girls. Such unselfish ventures knit people together, constructive thinking is channeled, pride is engendered, a sense of responsibility to the community is created.” 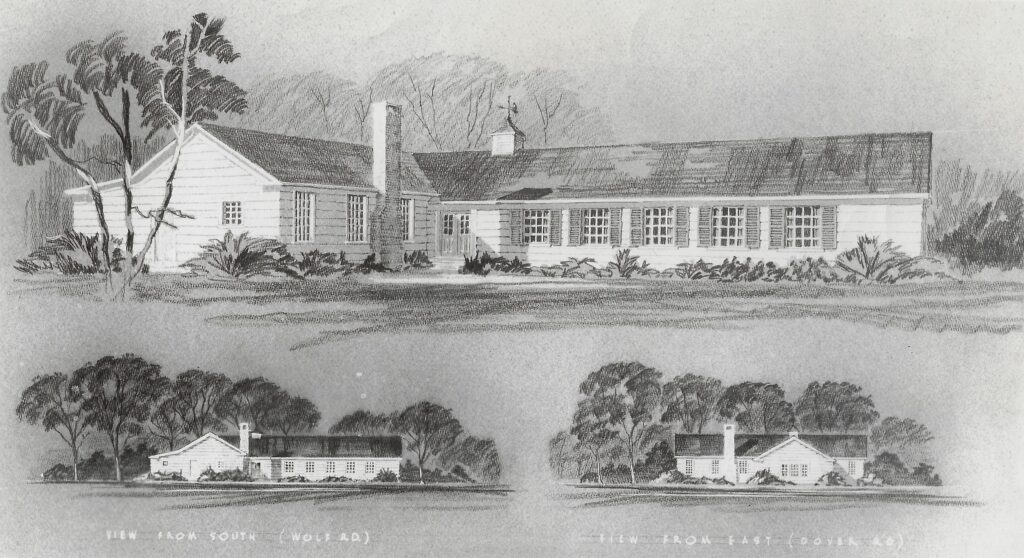 The improvements didn’t stop there. Remember, this was the mid-20th century and there was a baby boom going on all over the United States, including in Bay Village, Ohio. This may be why the population of the town increased from about 3,000 in 1943 (when the idea of a youth center first started) to over 10,000 in 1956. New housing increased from a total of 1,006 in the 1940s to 2,133 by the end of the 1950s (the highest number of houses built in Bay in any decade in our history). Bayway cabin soon outgrew the needs of the young people in Bay. 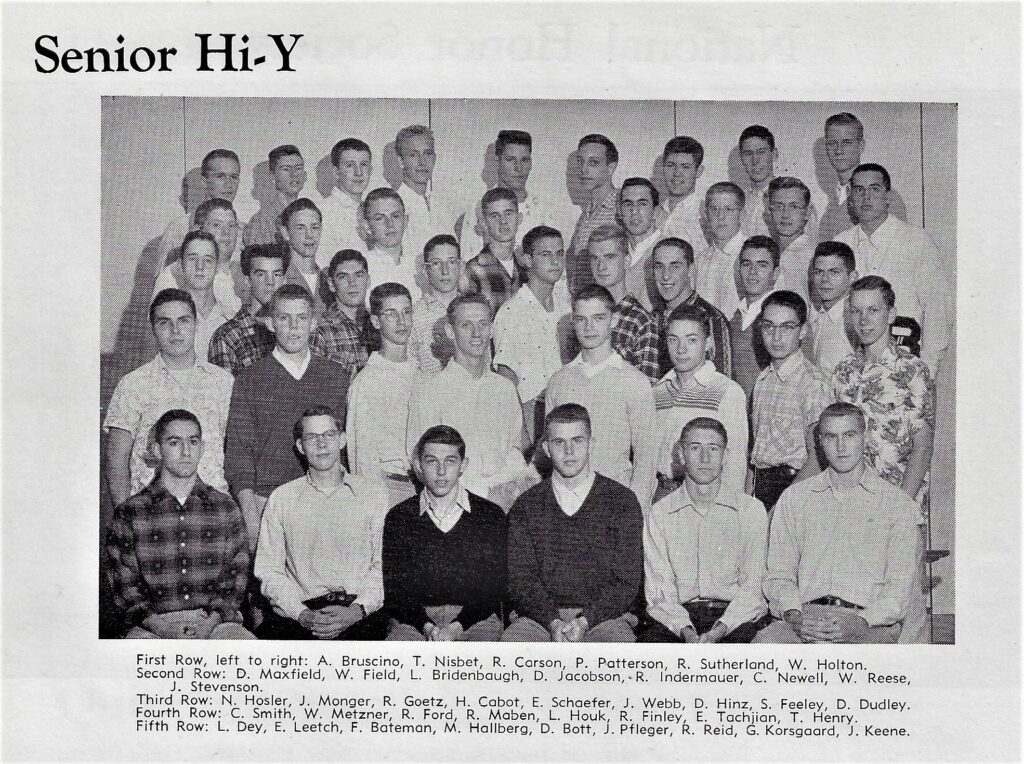 Bay High School Senior Hi-Y club (from the 1956 Bay Blue Book). Bob Reid is in the top row, third from the right.

Bob Reid recalled a meeting at the Bayway in 1956, “Our Hi-Y club was meeting in May, right before we graduated, and we must have had $75 in our treasury and the question was what to do with it. As it happened, the night we were meeting, the Kiwanians were also meeting…we in marched, the whole Hi-Y Club, and interrupted their meeting to tell them we need to start expanding the Bayway.” Hi-Y President Al Bruscino spoke for his group and then gave the Kiwanis Club all they had left in their Hi-Y treasury as seed money to get the project going. 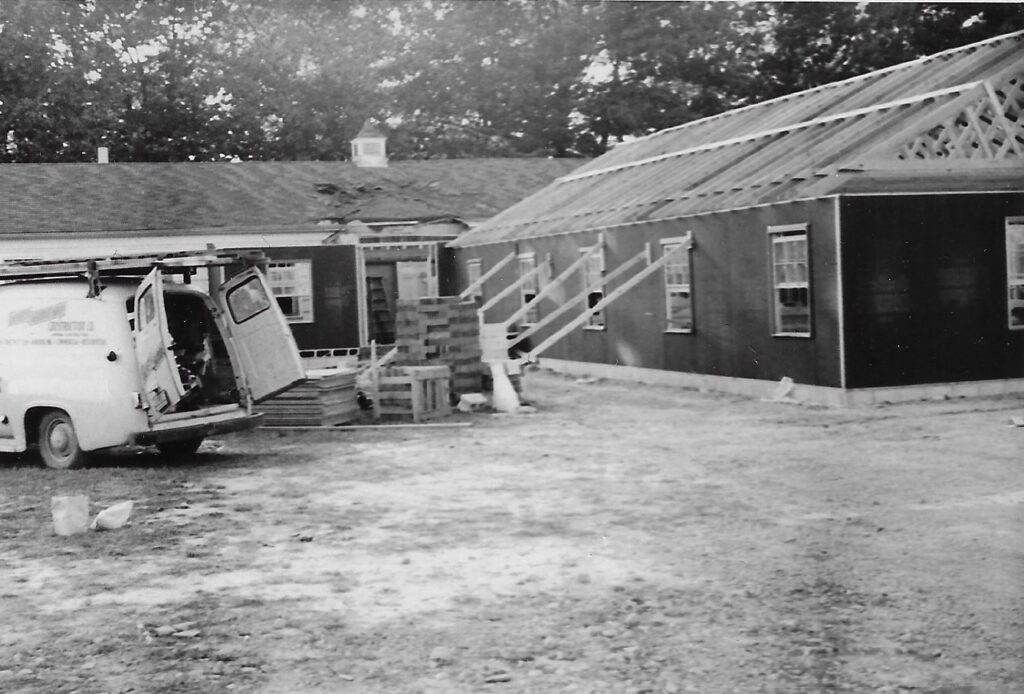 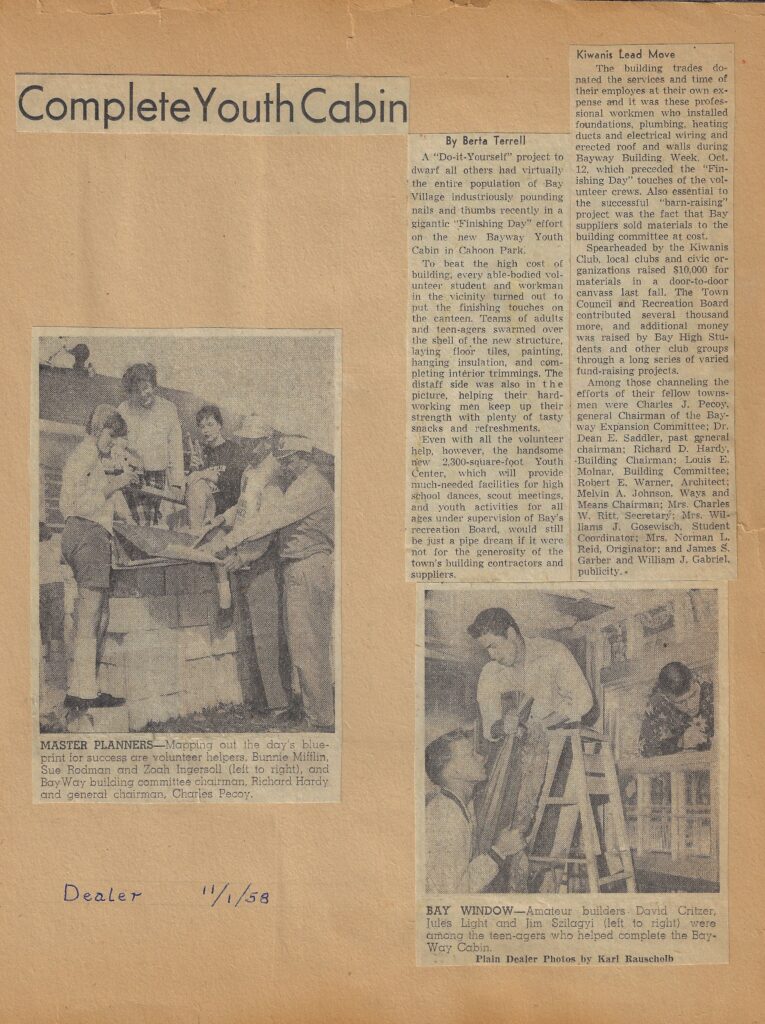 Again, the town came together to build a youth center and again Ester Reid and a too numerous to list group of townspeople helped make it a reality. Charles J. Pecoy and Dr. Dean E. Saddler were General Chairman of the Bayway Expansion Committee and Past General Chairman, respectively. The local teenagers were credited for their fundraising activities which included car washes, dances, pancake days, door-to-door canvassing, and making publicity posters, amongst other activities. Bob Reid recalled working concessions at dances on the tennis courts in Cahoon Memorial Park. The town’s fundraising activities raised about $12,000, with an additional $8,000 from the City Council and the Recreation Board, but it wasn’t enough. The committee needed more help from the community. Most notably, Bay teens helped in the actual construction of the new 2,300 sq. ft. addition to the Bayway after a week-long buildup by professional contractors to a “Bayway Finishing Day” on October 18, 1958. On that day, the youth were joined by skilled and semi-skilled citizens for a day of community work and celebration. By November of 1958, Dr. Saddler turned over the keys to the now 4,700 sq. ft. building to Mayor Gershom Barber for the town youth to begin use. 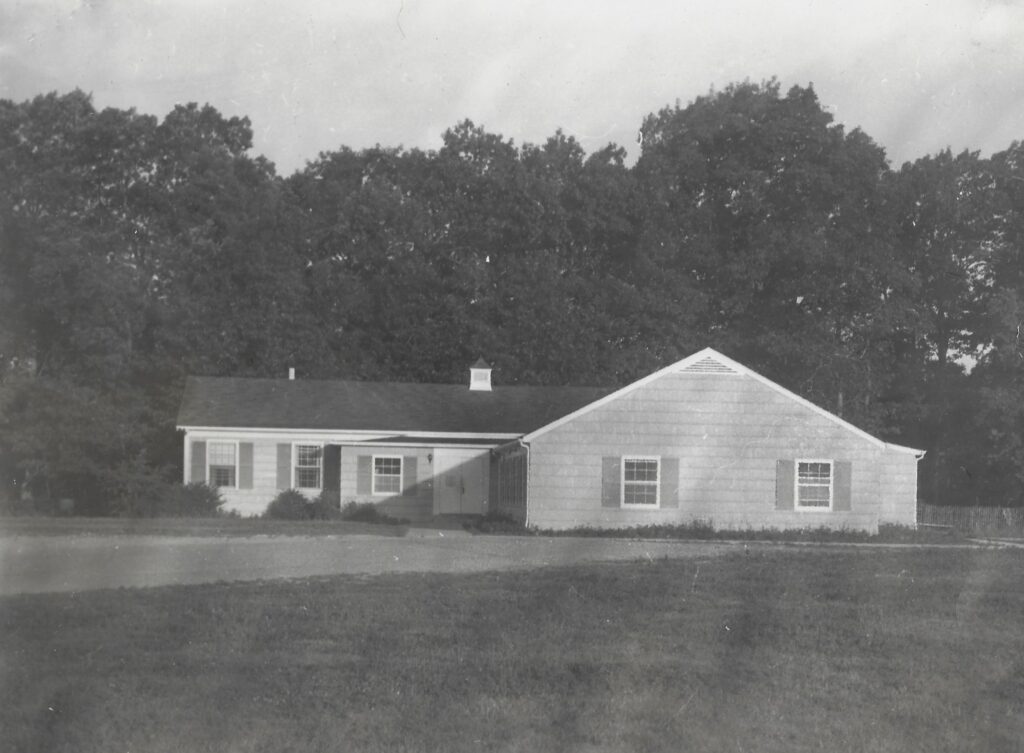 In a write up about the Bayway expansion just before the construction in 1958 titled “A Community Pulls Together to Prevent Delinquency Before It Can Happen,” it is noted that the effort that was made is worthy of publicity. “Behind this “history” is a wealth of human interest. Bay Village is a rather “typical,” “ideal” suburban community of proudly tended, neat homes that has grown from a close-knit village to a city of widely separated special-interest groups. The force of a project that is being done for and with its kids has served to pull these groups together. The drive and effort of devoted citizens have made it go. Building trades are donating services and suppliers selling without profit. Here is a social phenomenon worthy of a second look—noteworthy because it can be made to happen elsewhere—an expression of the kind of community leadership that can provide facilities to put kids on the right path—a project to prevent juvenile delinquency before it happens, by providing youth facilities when they are needed.” 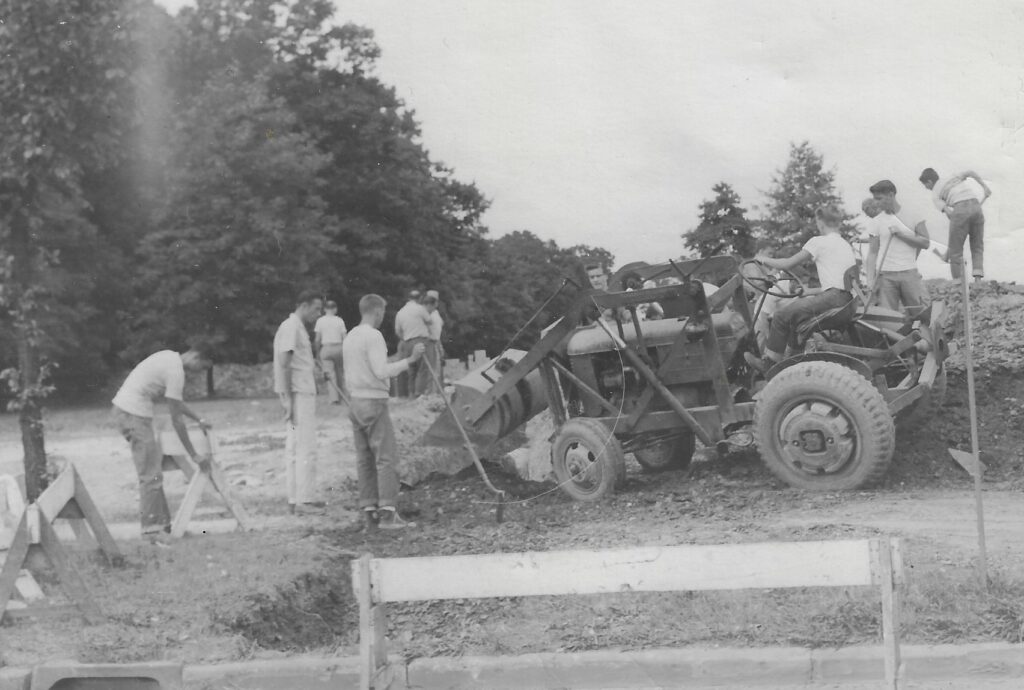 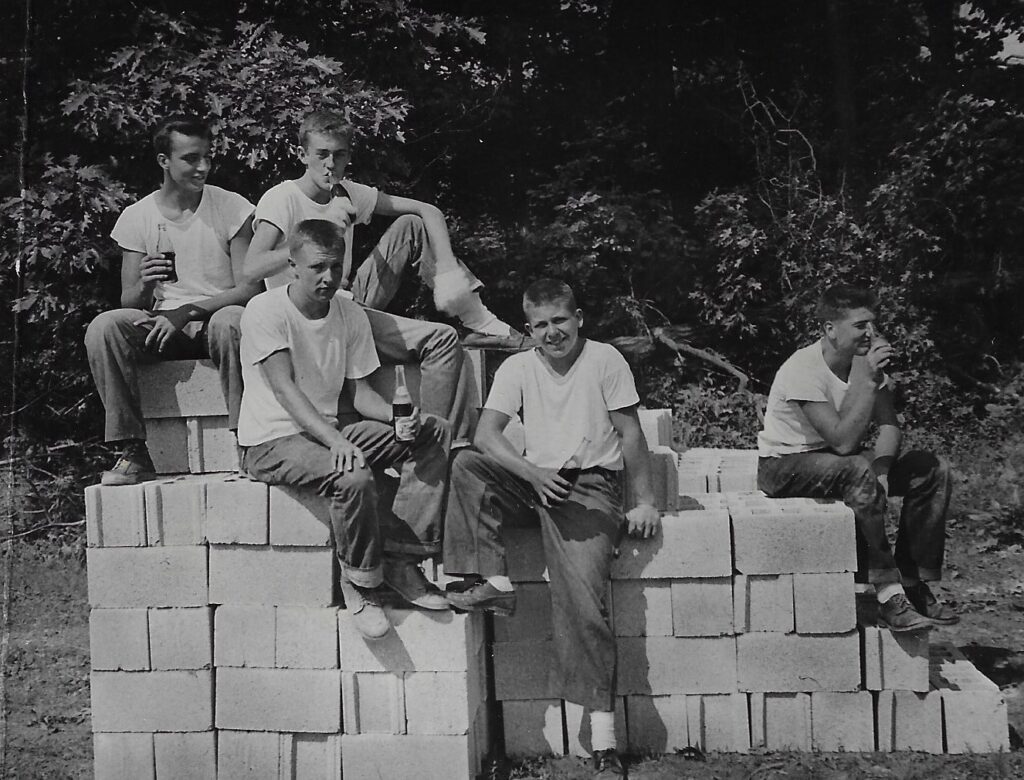 We have only a few papers from the 1960s about Bayway and very little between then and the 1990s to fill in the gaps. We will continue our history of Bayway Cabin’s later years in another post to come soon.

Your donations and memberships help keep these artifacts preserved and accessible to all and can be made by visiting our webpage https://www.bayhistorical.com/support-us/

If you have any Bayway photos to share with us or can identify people in the posted photos, please contact us at (440) 871-7338 or email us: info@bayhistorical.com.