The following post was excerpted from an article written by Bay Village Historical Society Board Member Cynthia Eakin. The article appeared in the October 2022 issue of the publication Currents. It discusses 19th century American cooking with Angie George from a presentation of the topic to our members, last fall.

If you would like to find out more about membership in the Bay Village Historical Society, contact us at (440) 871-7338 or email: info@bayhistorical.com. You may also sign up via our website on the Support Us Page. Remember that the Rose Hill Museum and Osborn Learning Centers buildings are currently closed to the general public until April 2023.

Ohio’s history came to life in a presentation to the Bay Village Historical Society on pioneer cuisine by Angie George, a member of the North Coast Narrative. 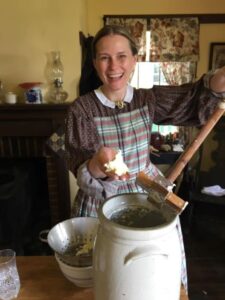 George, a Kent State University graduate with a degree in history, specializes in mid 19th century domestic life. Have you ever wondered what people ate before supermarkets existed? How was food prepared? What did kitchens look like 150 years ago, before electricity? George, who has worked in education at Hale Farm and Village, provided the answers.

Most people lived on a farm and grew their own food when Ohio became a state in 1803. The state had very fertile soil and access to major waterways because of the Ohio and Erie Canal. Specialty items like coconuts and pineapple were available, George said, but expensive items like chocolate and vanilla were hard to come by. In fact, she said that most people had never tasted vanilla, unless they lived in Mexico where vanilla beans were grown. “Chocolate ice cream was served as the dessert at President Lincoln’s inaugural dinner,” she noted.

“Lavender and rosewater were used as flavorings instead of vanilla. Without baking soda, it was hard to get a cake to rise. Beverages of the day included coffee, tea, cider, lemonade, brandy and wine. Ladies were limited in the amount of coffee that they were permitted to drink because it was considered too stimulating,” she said.

The original method of cooking in a home was over an open hearth with a crane. “This method of cooking is inefficient, since it lets heat escape up and is very smoky. You had to get up very early to start the fire for cooking,” George noted, adding that most ladies spent pretty much the entire day cooking. The cast iron cook stove became widely available in the 1840s. According to George, the base model cost about $4, while the deluxe model with a tank for heating water was priced at about $40. “The cast iron stove top had to be seasoned like a cast iron skillet or it would rust,” she said.

George said the first refrigerator was two barrels with straw and ice packed between them to keep food cold for a short time. Large animals were processed on cooler days following harvest before winter. Meats were preserved by salting, smoking, pounding into a paste and potting with butter, and freezing during very cold winters. Eggs were stored by coating with wax and packing them in crates with straw or sawdust. They were also parboiled and buried small end down in powdered charcoal, or stored in a lime water solution. Dairy was turned into cheese or butter.

Ketchup was a common sauce for meat, George noted. Ketchup is from the Chinese word, ke-tsiap, a sauce derived from fermented fish. Early ketchups used mushrooms as a base and were thin and dark. Tomato ketchup, a blend of tomato pulp, spices and brandy, was invented around 1812. However, according to George, some producers handled and stored the product so poorly that contaminants like bacteria, spores, yeast, mold and unsafe preservatives like coal tar and red paint deemed it unsafe for consumption. “In 1876, Mr. Henry Heinz discovered that, if you put vinegar in the recipe, it would extend the shelf life,” she added.

The World’s Fair in Philadelphia in 1876 featured a colonial kitchen exhibit described as revolving around old-fashioned domesticity. “The longest line for any exhibit at the fair was to see a banana. Bananas were unknown in America,” George said. Several banana trees were displayed in a greenhouse. Samples were sold wrapped in paper and were eaten with a knife and fork.

Thomas Jefferson, the son of a well-to-do landowner, was exposed to French cuisine and regarded as a status of sophistication. “Jefferson had a personal chef who traveled with him. He brought a macaroni mould, or pasta machine, back to the United States to make one of his favorite dishes, macaroni pipes with cheese,” she said. Jefferson experimented with cultivating more than 250 varieties of vegetables, stole rice from fields in Italy and shipped it back to America and bought a “cream machine for ice” while in Paris. George said the first ice cream parlor in Ohio opened in Akron in the 1850s.

Posted in Blog, Glimpse of the Past and tagged 1800s cooking.